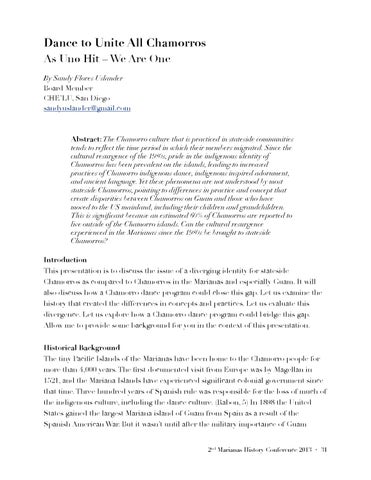 Dance to Unite All Chamorros As Uno Hit – We Are One

Abstract: The Chamorro culture that is practiced in stateside communities tends to reflect the time period in which their members migrated. Since the cultural resurgence of the 1980s, pride in the indigenous identity of Chamorros has been prevalent on the islands, leading to increased practices of Chamorro indigenous dance, indigenous inspired adornment, and ancient language. Yet these phenomena are not understood by most stateside Chamorros, pointing to differences in practice and concept that create disparities between Chamorros on Guam and those who have moved to the US mainland, including their children and grandchildren. This is significant because an estimated 60% of Chamorros are reported to live outside of the Chamorro islands. Can the cultural resurgence experienced in the Marianas since the 1980s be brought to stateside Chamorros? Introduction This presentation is to discuss the issue of a diverging identity for stateside Chamorros as compared to Chamorros in the Marianas and especially Guam. It will also discuss how a Chamorro dance program could close this gap. Let us examine the history that created the differences in concepts and practices. Let us evaluate this divergence. Let us explore how a Chamorro dance program could bridge this gap. Allow me to provide some background for you in the context of this presentation.

Historical Background The tiny Pacific Islands of the Marianas have been home to the Chamorro people for more than 4,000 years. The first documented visit from Europe was by Magellan in 1521, and the Mariana Islands have experienced significant colonial government since that time. Three hundred years of Spanish rule was responsible for the loss of much of the indigenous culture, including the dance culture. (Rabon, 5) In 1898 the United States gained the largest Mariana island of Guam from Spain as a result of the Spanish American War. But it wasn’t until after the military importance of Guam 2nd Marianas History Conference 2013 ・ !31