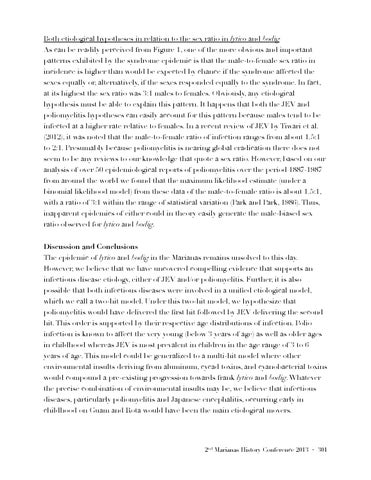 Both etiological hypotheses in relation to the sex ratio in lytico and bodig As can be readily perceived from Figure 1, one of the more obvious and important patterns exhibited by the syndrome epidemic is that the male-to-female sex ratio in incidence is higher than would be expected by chance if the syndrome affected the sexes equally or, alternatively, if the sexes responded equally to the syndrome. In fact, at its highest the sex ratio was 3:1 males to females. Obviously, any etiological hypothesis must be able to explain this pattern. It happens that both the JEV and poliomyelitis hypotheses can easily account for this pattern because males tend to be infected at a higher rate relative to females. In a recent review of JEV by Tiwari et al. (2012), it was noted that the male-to-female ratio of infection ranges from about 1.5:1 to 2:1. Presumably because poliomyelitis is nearing global eradication there does not seem to be any reviews to our knowledge that quote a sex ratio. However, based on our analysis of over 50 epidemiological reports of poliomyelitis over the period 1887-1987 from around the world we found that the maximum likelihood estimate (under a binomial likelihood model) from these data of the male-to-female ratio is about 1.5:1, with a ratio of 3:1 within the range of statistical variation (Park and Park, 1986). Thus, inapparent epidemics of either could in theory easily generate the male-biased sex ratio observed for lytico and bodig.

Discussion and Conclusions The epidemic of lytico and bodig in the Marianas remains unsolved to this day. However, we believe that we have uncovered compelling evidence that supports an infectious disease etiology, either of JEV and/or poliomyelitis. Further, it is also possible that both infectious diseases were involved in a unified etiological model, which we call a two-hit model. Under this two-hit model, we hypothesize that poliomyelitis would have delivered the first hit followed by JEV delivering the second hit. This order is supported by their respective age distributions of infection. Polio infection is known to affect the very young (below 3 years of age) as well as older ages in childhood whereas JEV is most prevalent in children in the age range of 3 to 6 years of age. This model could be generalized to a multi-hit model where other environmental insults deriving from aluminum, cycad toxins, and cyanobacterial toxins would compound a pre-existing progression towards frank lytico and bodig. Whatever the precise combination of environmental insults may be, we believe that infectious diseases, particularly poliomyelitis and Japanese encephalitis, occurring early in childhood on Guam and Rota would have been the main etiological movers.