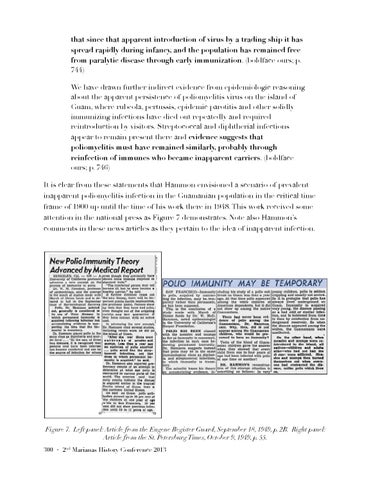 that since that apparent introduction of virus by a trading ship it has spread rapidly during infancy, and the population has remained free from paralytic disease through early immunization. (boldface ours; p. 744) We have drawn further indirect evidence from epidemiologic reasoning about the apparent persistence of poliomyelitis virus on the island of Guam, where rubeola, pertussis, epidemic parotitis and other solidly immunizing infections have died out repeatedly and required reintroduction by visitors. Streptococcal and diphtherial infections appear to remain present there and evidence suggests that poliomyelitis must have remained similarly, probably through reinfection of immunes who became inapparent carriers. (boldface ours; p. 746) It is clear from these statements that Hammon envisioned a scenario of prevalent inapparent poliomyelitis infection in the Guamanian population in the critical time frame of 1900 up until the time of his work there in 1948. This work received some attention in the national press as Figure 7 demonstrates. Note also Hammonâ&#x20AC;&#x2122;s comments in these news articles as they pertain to the idea of inapparent infection.