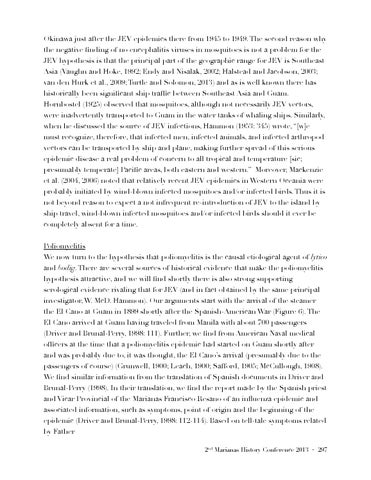 Okinawa just after the JEV epidemics there from 1945 to 1949. The second reason why the negative finding of no encephalitis viruses in mosquitoes is not a problem for the JEV hypothesis is that the principal part of the geographic range for JEV is Southeast Asia (Vaughn and Hoke, 1992; Endy and Nisalak, 2002; Halstead and Jacobson, 2003; van den Hurk et al., 2009; Turtle and Solomon, 2013) and as is well known there has historically been significant ship traffic between Southeast Asia and Guam. Hornbostel (1925) observed that mosquitoes, although not necessarily JEV vectors, were inadvertently transported to Guam in the water tanks of whaling ships. Similarly, when he discussed the source of JEV infections, Hammon (1953: 345) wrote, “[w]e must recognize, therefore, that infected men, infected animals, and infected arthropod vectors can be transported by ship and plane, making further spread of this serious epidemic disease a real problem of concern to all tropical and temperature [sic; presumably temperate] Pacific areas, both eastern and western.” Moreover, Mackenzie et al. (2004, 2006) noted that relatively recent JEV epidemics in Western Oceania were probably initiated by wind-blown infected mosquitoes and/or infected birds. Thus it is not beyond reason to expect a not infrequent re-introduction of JEV to the island by ship travel, wind-blown infected mosquitoes and/or infected birds should it ever be completely absent for a time.

Poliomyelitis We now turn to the hypothesis that poliomyelitis is the causal etiological agent of lytico and bodig. There are several sources of historical evidence that make the poliomyelitis hypothesis attractive, and we will find shortly there is also strong supporting serological evidence rivaling that for JEV (and in fact obtained by the same principal investigator, W. McD. Hammon). Our arguments start with the arrival of the steamer the El Cano at Guam in 1899 shortly after the Spanish-American War (Figure 6). The El Cano arrived at Guam having traveled from Manila with about 700 passengers (Driver and Brunal-Perry, 1998: 111). Further, we find from American Naval medical officers at the time that a poliomyelitis epidemic had started on Guam shortly after and was probably due to, it was thought, the El Cano’s arrival (presumably due to the passengers of course) (Grunwell, 1900; Leach, 1900; Safford, 1905; McCullough, 1908). We find similar information from the translation of Spanish documents in Driver and Brunal-Perry (1998). In their translation, we find the report made by the Spanish priest and Vicar Provincial of the Marianas Francisco Resano of an influenza epidemic and associated information, such as symptoms, point of origin and the beginning of the epidemic (Driver and Brunal-Perry, 1998: 112-114). Based on tell-tale symptoms related by Father 2nd Marianas History Conference 2013 ・ !297