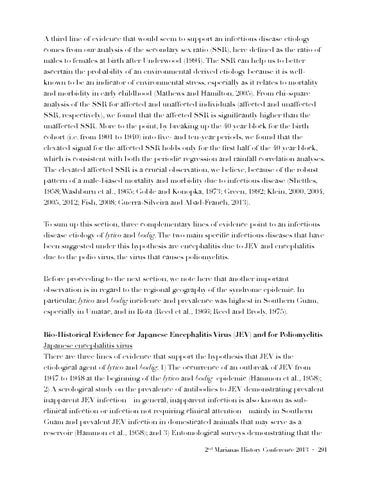 A third line of evidence that would seem to support an infectious disease etiology comes from our analysis of the secondary sex ratio (SSR), here defined as the ratio of males to females at birth after Underwood (1994). The SSR can help us to better ascertain the probability of an environmental derived etiology because it is wellknown to be an indicator of environmental stress, especially as it relates to mortality and morbidity in early childhood (Mathews and Hamilton, 2005). From chi-square analysis of the SSR for affected and unaffected individuals (affected and unaffected SSR, respectively), we found that the affected SSR is significantly higher than the unaffected SSR. More to the point, by breaking up the 40 year block for the birth cohort (i.e. from 1901 to 1940) into five- and ten-year periods, we found that the elevated signal for the affected SSR holds only for the first half of the 40 year block, which is consistent with both the periodic regression and rainfall correlation analyses. The elevated affected SSR is a crucial observation, we believe, because of the robust pattern of a male-biased mortality and morbidity due to infectious disease (Shettles, 1958; Washburn et al., 1965; Goble and Konopka, 1973; Green, 1992; Klein, 2000, 2004, 2005, 2012; Fish, 2008; Guerra-Silveira and Abad-Franch, 2013).

Before proceeding to the next section, we note here that another important observation is in regard to the regional geography of the syndrome epidemic. In particular, lytico and bodig incidence and prevalence was highest in Southern Guam, especially in Umatac, and in Rota (Reed et al., 1966; Reed and Brody, 1975).

Bio-Historical Evidence for Japanese Encephalitis Virus (JEV) and for Poliomyelitis Japanese encephalitis virus There are three lines of evidence that support the hypothesis that JEV is the etiological agent of lytico and bodig: 1) The occurrence of an outbreak of JEV from 1947 to 1948 at the beginning of the lytico and bodig epidemic (Hammon et al., 1958); 2) A serological study on the prevalence of antibodies to JEV demonstrating prevalent inapparent JEV infection—in general, inapparent infection is also known as subclinical infection or infection not requiring clinical attention—mainly in Southern Guam and prevalent JEV infection in domesticated animals that may serve as a reservoir (Hammon et al., 1958); and 3) Entomological surveys demonstrating that the 2nd Marianas History Conference 2013 ・ !291