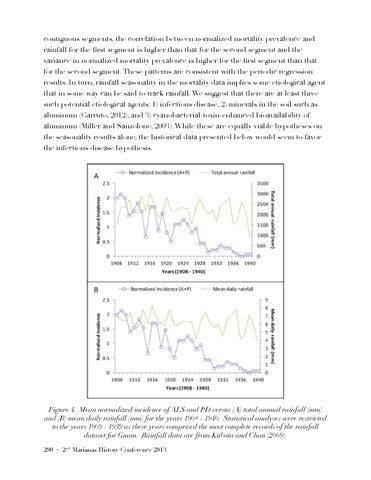 contiguous segments, the correlation between normalized mortality prevalence and rainfall for the first segment is higher than that for the second segment and the variance in normalized mortality prevalence is higher for the first segment than that for the second segment. These patterns are consistent with the periodic regression results. In turn, rainfall seasonality in the mortality data implies some etiological agent that in some way can be said to track rainfall. We suggest that there are at least three such potential etiological agents: 1) infectious disease, 2) minerals in the soil such as aluminum (Garruto, 2012), and 3) cyanobacterial-toxin-enhanced bioavailability of aluminum (Miller and Sanzolone, 2003). While these are equally viable hypotheses on the seasonality results alone, the historical data presented below would seem to favor the infectious disease hypothesis.

Figure 4. Mean normalized incidence of ALS and PD versus (A) total annual rainfall (mm) and (B) mean daily rainfall (mm) for the years 1908 - 1940. Statistical analyses were restricted to the years 1909 - 1939 as these years comprised the most complete records of the rainfall dataset for Guam. Rainfall data are from Kubota and Chan (2009). 290 ! ă&#x192;ť 2nd Marianas History Conference 2013