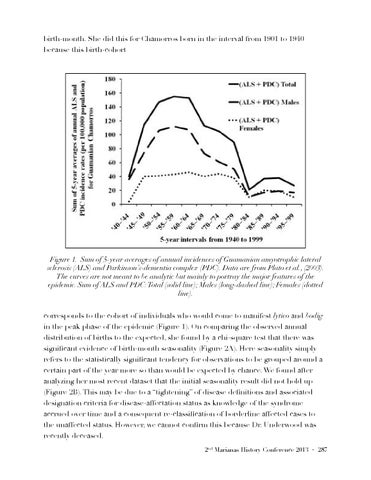 birth-month. She did this for Chamorros born in the interval from 1901 to 1940 because this birth-cohort

Figure 1. Sum of 5-year averages of annual incidences of Guamanian amyotrophic lateral sclerosis (ALS) and Parkinson’s-dementia complex (PDC). Data are from Plato et al., (2003). The curves are not meant to be analytic but mainly to portray the major features of the epidemic. Sum of ALS and PDC: Total (solid line); Males (long-dashed line); Females (dotted line).

corresponds to the cohort of individuals who would come to manifest lytico and bodig in the peak phase of the epidemic (Figure 1). On comparing the observed annual distribution of births to the expected, she found by a chi-square test that there was significant evidence of birth-month seasonality (Figure 2A). Here seasonality simply refers to the statistically significant tendency for observations to be grouped around a certain part of the year more so than would be expected by chance. We found after analyzing her most recent dataset that the initial seasonality result did not hold up (Figure 2B). This may be due to a “tightening” of disease definitions and associated designation criteria for disease-affectation status as knowledge of the syndrome accrued over time and a consequent re-classification of borderline affected cases to the unaffected status. However, we cannot confirm this because Dr. Underwood was recently deceased. 2nd Marianas History Conference 2013 ・ !287