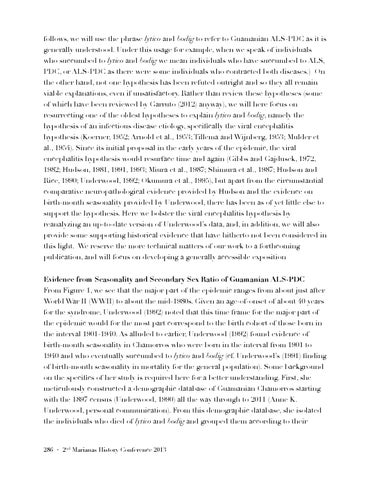 follows, we will use the phrase lytico and bodig to refer to Guamanian ALS-PDC as it is generally understood. Under this usage for example, when we speak of individuals who succumbed to lytico and bodig we mean individuals who have succumbed to ALS, PDC, or ALS-PDC as there were some individuals who contracted both diseases.) On the other hand, not one hypothesis has been refuted outright and so they all remain viable explanations, even if unsatisfactory. Rather than review these hypotheses (some of which have been reviewed by Garruto (2012) anyway), we will here focus on resurrecting one of the oldest hypotheses to explain lytico and bodig, namely the hypothesis of an infectious disease etiology, specifically the viral encephalitis hypothesis (Koerner, 1952; Arnold et al., 1953; Tillema and Wijnberg, 1953; Mulder et al., 1954). Since its initial proposal in the early years of the epidemic, the viral encephalitis hypothesis would resurface time and again (Gibbs and Gajdusek, 1972, 1982; Hudson, 1981, 1991, 1993; Miura et al., 1987; Shimura et al., 1987; Hudson and Rice, 1990; Underwood, 1992; Okumura et al., 1995), but apart from the circumstantial comparative neuropathological evidence provided by Hudson and the evidence on birth-month seasonality provided by Underwood, there has been as of yet little else to support the hypothesis. Here we bolster the viral encephalitis hypothesis by reanalyzing an up-to-date version of Underwoodâ&#x20AC;&#x2122;s data, and, in addition, we will also provide some supporting historical evidence that have hitherto not been considered in this light. We reserve the more technical matters of our work to a forthcoming publication, and will focus on developing a generally accessible exposition

Evidence from Seasonality and Secondary Sex Ratio of Guamanian ALS-PDC From Figure 1, we see that the major part of the epidemic ranges from about just after World War II (WWII) to about the mid-1980s. Given an age-of-onset of about 40 years for the syndrome, Underwood (1992) noted that this time frame for the major part of the epidemic would for the most part correspond to the birth cohort of those born in the interval 1901-1940. As alluded to earlier, Underwood (1992) found evidence of birth-month seasonality in Chamorros who were born in the interval from 1901 to 1940 and who eventually succumbed to lytico and bodig (cf. Underwoodâ&#x20AC;&#x2122;s (1991) finding of birth-month seasonality in mortality for the general population). Some background on the specifics of her study is required here for a better understanding. First, she meticulously constructed a demographic database of Guamanian Chamorros starting with the 1897 census (Underwood, 1990) all the way through to 2011 (Anne K. Underwood, personal communication). From this demographic database, she isolated the individuals who died of lytico and bodig and grouped them according to their