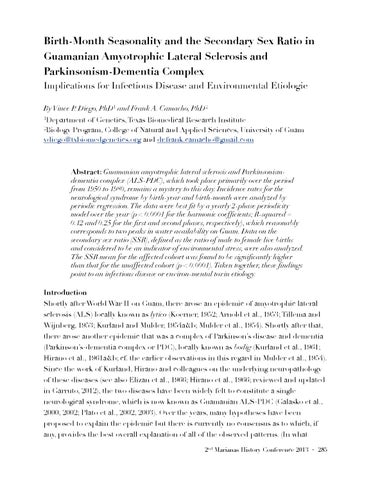 Abstract: Guamanian amyotrophic lateral sclerosis and Parkinsonismdementia complex (ALS-PDC), which took place primarily over the period from 1950 to 1980, remains a mystery to this day. Incidence rates for the neurological syndrome by birth-year and birth-month were analyzed by periodic regression. The data were best fit by a yearly 2-phase periodicity model over the year (p < 0.0001 for the harmonic coefficients; R-squared = 0.12 and 0.25 for the first and second phases, respectively), which reasonably corresponds to two peaks in water availability on Guam. Data on the secondary sex ratio (SSR), defined as the ratio of male to female live births and considered to be an indicator of environmental stress, were also analyzed. The SSR mean for the affected cohort was found to be significantly higher than that for the unaffected cohort (p < 0.0001). Taken together, these findings point to an infectious disease or environ-mental toxin etiology. Introduction Shortly after World War II on Guam, there arose an epidemic of amyotrophic lateral sclerosis (ALS) locally known as lytico (Koerner, 1952; Arnold et al., 1953; Tillema and Wijnberg, 1953; Kurland and Mulder, 1954a&b; Mulder et al., 1954). Shortly after that, there arose another epidemic that was a complex of Parkinson’s disease and dementia (Parkinson’s-dementia complex or PDC), locally known as bodig (Kurland et al., 1961; Hirano et al., 1961a&b; cf. the earlier observations in this regard in Mulder et al., 1954). Since the work of Kurland, Hirano and colleagues on the underlying neuropathology of these diseases (see also Elizan et al., 1966; Hirano et al., 1966; reviewed and updated in Garruto, 2012), the two diseases have been widely felt to constitute a single neurological syndrome, which is now known as Guamanian ALS-PDC (Galasko et al., 2000, 2002; Plato et al., 2002, 2003). Over the years, many hypotheses have been proposed to explain the epidemic but there is currently no consensus as to which, if any, provides the best overall explanation of all of the observed patterns. (In what 2nd Marianas History Conference 2013 ・ !285