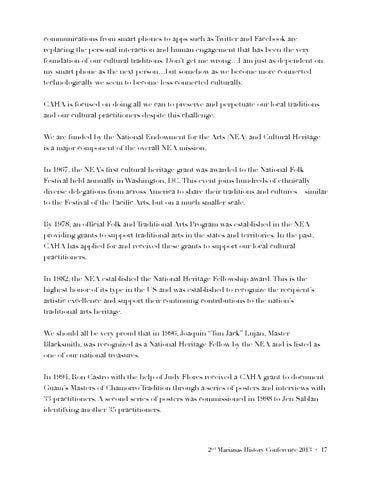 communications from smart phones to apps such as Twitter and Facebook are replacing the personal interaction and human engagement that has been the very foundation of our cultural traditions. Don’t get me wrong…I am just as dependent on my smart phone as the next person…but somehow as we become more connected technologically we seem to become less connected culturally.

CAHA is focused on doing all we can to preserve and perpetuate our local traditions and our cultural practitioners despite this challenge.

We are funded by the National Endowment for the Arts (NEA) and Cultural Heritage is a major component of the overall NEA mission.

In 1967, the NEA’s first cultural heritage grant was awarded to the National Folk Festival held annually in Washington, DC. This event joins hundreds of ethnically diverse delegations from across America to share their traditions and cultures – similar to the Festival of the Pacific Arts, but on a much smaller scale.

By 1978, an official Folk and Traditional Arts Program was established in the NEA providing grants to support traditional arts in the states and territories. In the past, CAHA has applied for and received these grants to support our local cultural practitioners.

In 1982, the NEA established the National Heritage Fellowship award. This is the highest honor of its type in the US and was established to recognize the recipient’s artistic excellence and support their continuing contributions to the nation’s traditional arts heritage.

We should all be very proud that in 1996, Joaquin “Tun Jack” Lujan, Master Blacksmith, was recognized as a National Heritage Fellow by the NEA and is listed as one of our national treasures.