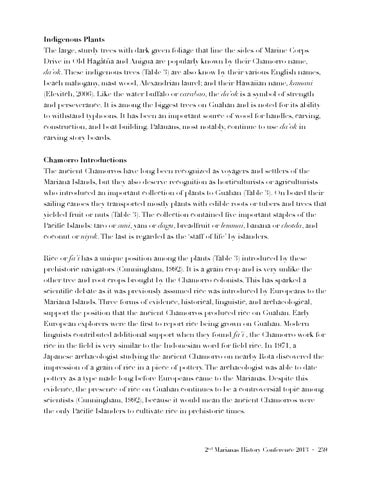 Indigenous Plants The large, sturdy trees with dark green foliage that line the sides of Marine Corps Drive in Old Hagåtña and Anigua are popularly known by their Chamorro name, da’ok. These indigenous trees (Table 3) are also know by their various English names, beach mahogany, mast wood, Alexandrian laurel; and their Hawaiian name, kamani (Elevitch, 2006). Like the water buffalo or carabao, the da’ok is a symbol of strength and perseverance. It is among the biggest trees on Guahan and is noted for its ability to withstand typhoons. It has been an important source of wood for handles, carving, construction, and boat building. Palauans, most notably, continue to use da’ok in carving story boards.

Chamorro Introductions The ancient Chamorros have long been recognized as voyagers and settlers of the Mariana Islands, but they also deserve recognition as horticulturists or agriculturists who introduced an important collection of plants to Guahan (Table 3). On board their sailing canoes they transported mostly plants with edible roots or tubers and trees that yielded fruit or nuts (Table 3). The collection contained five important staples of the Pacific Islands: taro or suni, yam or dagu, breadfruit or lemmai, banana or chotda, and coconut or niyok. The last is regarded as the ‘staff of life’ by islanders.

Rice or fa’i has a unique position among the plants (Table 3) introduced by these prehistoric navigators (Cunningham, 1992). It is a grain crop and is very unlike the other tree and root crops brought by the Chamorro colonists. This has sparked a scientific debate as it was previously assumed rice was introduced by Europeans to the Mariana Islands. Three forms of evidence, historical, linguistic, and archaeological, support the position that the ancient Chamorros produced rice on Guahan. Early European explorers were the first to report rice being grown on Guahan. Modern linguists contributed additional support when they found fa’i , the Chamorro work for rice in the field is very similar to the Indonesian word for field rice. In 1971, a Japanese archaeologist studying the ancient Chamorro on nearby Rota discovered the impression of a grain of rice in a piece of pottery. The archaeologist was able to date pottery as a type made long before Europeans came to the Marianas. Despite this evidence, the presence of rice on Guahan continues to be a controversial topic among scientists (Cunningham, 1992), because it would mean the ancient Chamorros were the only Pacific Islanders to cultivate rice in prehistoric times.