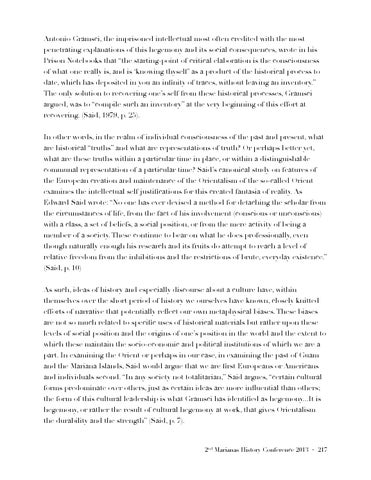 Antonio Gramsci, the imprisoned intellectual most often credited with the most penetrating explanations of this hegemony and its social consequences, wrote in his Prison Notebooks that “the starting-point of critical elaboration is the consciousness of what one really is, and is ‘knowing thyself’ as a product of the historical process to date, which has deposited in you an infinity of traces, without leaving an inventory.” The only solution to recovering one’s self from these historical processes, Gramsci argued, was to “compile such an inventory” at the very beginning of this effort at recovering. (Said, 1979, p. 25).

In other words, in the realm of individual consciousness of the past and present, what are historical “truths” and what are representations of truth? Or perhaps better yet, what are these truths within a particular time in place, or within a distinguishable communal representation of a particular time? Said’s canonical study on features of the European creation and maintenance of the Orientalism of the so-called Orient examines the intellectual self justifications for this created fantasia of reality. As Edward Said wrote: “No one has ever devised a method for detaching the scholar from the circumstances of life, from the fact of his involvement (conscious or unconscious) with a class, a set of beliefs, a social position, or from the mere activity of being a member of a society. These continue to bear on what he does professionally, even though naturally enough his research and its fruits do attempt to reach a level of relative freedom from the inhibitions and the restrictions of brute, everyday existence.” (Said, p. 10)

As such, ideas of history and especially discourse about a culture have, within themselves over the short period of history we ourselves have known, closely knitted efforts of narrative that potentially reflect our own metaphysical biases. These biases are not so much related to specific uses of historical materials but rather upon these levels of social position and the origins of one’s position in the world and the extent to which these maintain the socio-economic and political institutions of which we are a part. In examining the Orient or perhaps in our case, in examining the past of Guam and the Mariana Islands, Said would argue that we are first Europeans or Americans and individuals second. “In any society not totalitarian,” Said argues, “certain cultural forms predominate over others, just as certain ideas are more influential than others; the form of this cultural leadership is what Gramsci has identified as hegemony...It is hegemony, or rather the result of cultural hegemony at work, that gives Orientalism the durability and the strength” (Said, p. 7).