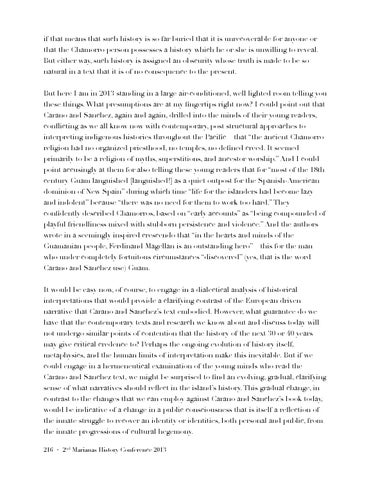 if that means that such history is so far buried that it is unrecoverable for anyone or that the Chamorro person possesses a history which he or she is unwilling to reveal. But either way, such history is assigned an obscurity whose truth is made to be so natural in a text that it is of no consequence to the present.

But here I am in 2013 standing in a large air-conditioned, well lighted room telling you these things. What presumptions are at my fingertips right now? I could point out that Carano and Sanchez, again and again, drilled into the minds of their young readers, – conflicting as we all know now with contemporary, post structural approaches to interpreting indigenous histories throughout the Pacific – that “the ancient Chamorro religion had no organized priesthood, no temples, no defined creed. It seemed primarily to be a religion of myths, superstitions, and ancestor worship.” And I could point accusingly at them for also telling these young readers that for “most of the 18th century Guam languished [languished!] as a quiet outpost for the Spanish-American dominion of New Spain” during which time “life for the islanders had become lazy and indolent” because “there was no need for them to work too hard.” They confidently described Chamorros, based on “early accounts” as “being compounded of playful friendliness mixed with stubborn persistence and violence.” And the authors wrote in a seemingly inspired crescendo that “in the hearts and minds of the Guamanian people, Ferdinand Magellan is an outstanding hero” – this for the man who under completely fortuitous circumstances “discovered” (yes, that is the word Carano and Sanchez use) Guam.

It would be easy now, of course, to engage in a dialectical analysis of historical interpretations that would provide a clarifying contrast of the European driven narrative that Carano and Sanchez’s text embodied. However, what guarantee do we have that the contemporary texts and research we know about and discuss today will not undergo similar points of contention that the history of the next 30 or 40 years may give critical credence to? Perhaps the ongoing evolution of history itself, metaphysics, and the human limits of interpretation make this inevitable. But if we could engage in a hermeneutical examination of the young minds who read the Carano and Sanchez text, we might be surprised to find an evolving, gradual, clarifying sense of what narratives should reflect in the island’s history. This gradual change, in contrast to the changes that we can employ against Carano and Sanchez’s book today, would be indicative of a change in a public consciousness that is itself a reflection of the innate struggle to recover an identity or identities, both personal and public, from the innate progressions of cultural hegemony. 216 ! ・ 2nd Marianas History Conference 2013