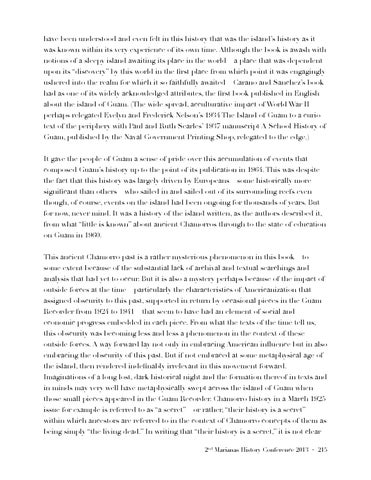 have been understood and even felt in this history that was the island’s history as it was known within its very experience of its own time. Although the book is awash with notions of a sleepy island awaiting its place in the world – a place that was dependent upon its “discovery” by this world in the first place from which point it was engagingly ushered into the realm for which it so faithfully awaited – Carano and Sanchez’s book had as one of its widely acknowledged attributes, the first book published in English about the island of Guam. (The wide spread, acculturative impact of World War II perhaps relegated Evelyn and Frederick Nelson’s 1934 The Island of Guam to a curio text of the periphery with Paul and Ruth Searles’ 1937 manuscript A School History of Guam, published by the Naval Government Printing Shop, relegated to the edge.)

It gave the people of Guam a sense of pride over this accumulation of events that composed Guam’s history up to the point of its publication in 1964. This was despite the fact that this history was largely driven by Europeans – some historically more significant than others – who sailed in and sailed out of its surrounding reefs even though, of course, events on the island had been ongoing for thousands of years. But for now, never mind. It was a history of the island written, as the authors described it, from what “little is known” about ancient Chamorros through to the state of education on Guam in 1960.

This ancient Chamorro past is a rather mysterious phenomenon in this book – to some extent because of the substantial lack of archival and textual searchings and analysis that had yet to occur. But it is also a mystery perhaps because of the impact of outside forces at the time – particularly the characteristics of Americanization that assigned obscurity to this past, supported in return by occasional pieces in the Guam Recorder from 1924 to 1941 – that seem to have had an element of social and economic progress embedded in each piece. From what the texts of the time tell us, this obscurity was becoming less and less a phenomenon in the context of these outside forces. A way forward lay not only in embracing American influence but in also embracing the obscurity of this past. But if not embraced at some metaphysical age of the island, then rendered indefinably irrelevant in this movement forward. Imaginations of a long lost, dark historical night and the formation thereof in texts and in minds may very well have metaphysically swept across the island of Guam when those small pieces appeared in the Guam Recorder. Chamorro history in a March 1925 issue for example is referred to as “a secret” – or rather, “their history is a secret” within which ancestors are referred to in the context of Chamorro concepts of them as being simply “the living dead.” In writing that “their history is a secret,” it is not clear 2nd Marianas History Conference 2013 ・ !215