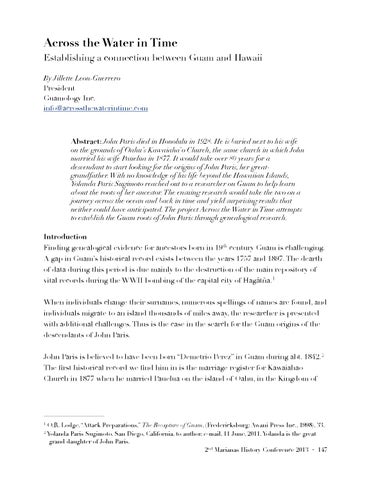 Abstract: John Paris died in Honolulu in 1928. He is buried next to his wife on the grounds of Oahu’s Kawaiaha`o Church, the same church in which John married his wife Pauelua in 1877. It would take over 80 years for a descendant to start looking for the origins of John Paris, her greatgrandfather. With no knowledge of his life beyond the Hawaiian Islands, Yolanda Paris Sugimoto reached out to a researcher on Guam to help learn about the roots of her ancestor. The ensuing research would take the two on a journey across the ocean and back in time and yield surprising results that neither could have anticipated. The project Across the Water in Time attempts to establish the Guam roots of John Paris through genealogical research. Introduction Finding genealogical evidence for ancestors born in 19th century Guam is challenging. A gap in Guam’s historical record exists between the years 1757 and 1897. The dearth of data during this period is due mainly to the destruction of the main repository of vital records during the WWII bombing of the capital city of Hagåtña.1

When individuals change their surnames, numerous spellings of names are found, and individuals migrate to an island thousands of miles away, the researcher is presented with additional challenges. Thus is the case in the search for the Guam origins of the descendants of John Paris.

John Paris is believed to have been born “Demetrio Perez” in Guam during abt. 1842.2 The first historical record we find him in is the marriage register for Kawaiahao Church in 1877 when he married Pauelua on the island of Oahu, in the Kingdom of