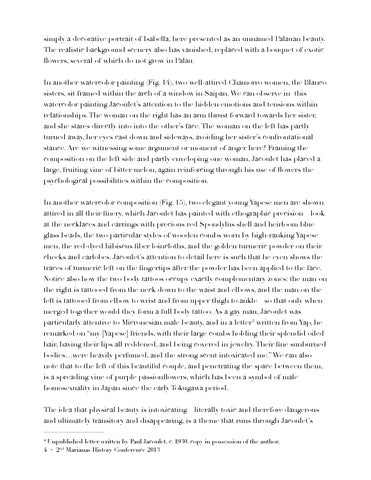 simply a decorative portrait of Isabella, here presented as an unnamed Palauan beauty. The realistic background scenery also has vanished, replaced with a bouquet of exotic flowers, several of which do not grow in Palau.

In another watercolor painting (Fig. 14), two well-attired Chamorro women, the Blanco sisters, sit framed within the arch of a window in Saipan. We can observe in this watercolor painting Jacoulet’s attention to the hidden emotions and tensions within relationships. The woman on the right has an arm thrust forward towards her sister, and she stares directly into into the other’s face. The woman on the left has partly turned away, her eyes cast down and sideways, avoiding her sister’s confrontational stance. Are we witnessing some argument or moment of anger here? Framing the composition on the left side and partly enveloping one woman, Jacoulet has placed a large, fruiting vine of bitter melon, again reinforcing through his use of flowers the psychological possibilities within the composition.

In another watercolor composition (Fig. 15), two elegant young Yapese men are shown attired in all their finery, which Jacoulet has painted with ethographic precision—look at the necklaces and earrings with precious red Spondylus shell and heirloom blue glass beads, the two particular styles of wooden combs worn by high-ranking Yapese men, the red-dyed hibiscus fiber loincloths, and the golden turmeric powder on their cheeks and earlobes. Jacoulet’s attention to detail here is such that he even shows the traces of turmeric left on the fingertips after the powder has been applied to the face. Notice also how the two body tattoos occupy exactly complementary zones: the man on the right is tattooed from the neck down to the waist and elbows, and the man on the left is tattooed from elbow to wrist and from upper thigh to ankle—so that only when merged together would they form a full body tattoo. As a gay man, Jacoulet was particularly attentive to Micronesian male beauty, and in a letter4 written from Yap, he remarked on “my [Yapese] friends, with their large combs holding their splendid oiled hair, having their lips all reddened, and being covered in jewelry. Their fine sunburned bodies…were heavily perfumed, and the strong scent intoxicated me.” We can also note that to the left of this beautiful couple, and penetrating the space between them, is a spreading vine of purple passionflowers, which has been a symbol of male homosexuality in Japan since the early Tokugawa period.

The idea that physical beauty is intoxicating—literally toxic and therefore dangerous— and ultimately transitory and disappearing, is a theme that runs through Jacoulet’s ! 4