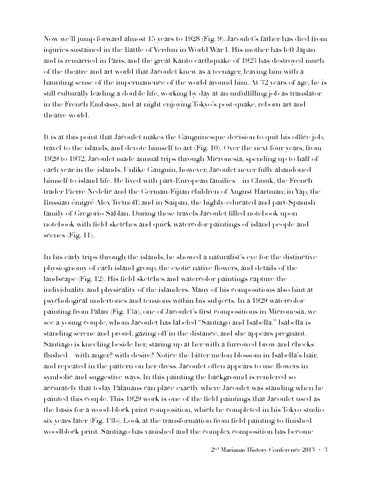 Now we’ll jump forward almost 15 years to 1928 (Fig. 9). Jacoulet’s father has died from injuries sustained in the Battle of Verdun in World War I. His mother has left Japan and is remarried in Paris, and the great Kanto earthquake of 1923 has destroyed much of the theatre and art world that Jacoulet knew as a teenager, leaving him with a haunting sense of the impermanence of the world around him. At 32 years of age, he is still culturally leading a double life, working by day at an unfulfilling job as translator in the French Embassy, and at night enjoying Tokyo’s post-quake, reborn art and theatre world.

It is at this point that Jacoulet makes the Gauguinesque decision to quit his office job, travel to the islands, and devote himself to art (Fig. 10). Over the next four years, from 1929 to 1932, Jacoulet made annual trips through Micronesia, spending up to half of each year in the islands. Unlike Gauguin, however, Jacoulet never fully abandoned himself to island life. He lived with part-European families—in Chuuk, the French trader Pierre Nedelic and the German-Fijian children of August Hartman; in Yap, the Russian émigré Alex Tretnoff; and in Saipan, the highly-educated and part-Spanish family of Gregorio Sablan. During these travels Jacoulet filled notebook upon notebook with field sketches and quick watercolor paintings of island people and scenes (Fig. 11).

In his early trips through the islands, he showed a naturalist’s eye for the distinctive physiognomy of each island group, the exotic native flowers, and details of the landscape (Fig. 12). His field sketches and watercolor paintings capture the individuality and physicality of the islanders. Many of his compositions also hint at psychological undertones and tensions within his subjects. In a 1929 watercolor painting from Palau (Fig. 13a), one of Jacoulet’s first compositions in Micronesia, we see a young couple, whom Jacoulet has labeled “Santiago and Isabella.” Isabella is standing serene and proud, gazing off in the distance, and she appears pregnant. Santiago is kneeling beside her, staring up at her with a furrowed brow and cheeks flushed—with anger? with desire? Notice the bitter melon blossom in Isabella’s hair, and repeated in the pattern on her dress. Jacoulet often appears to use flowers in symbolic and suggestive ways. In this painting the background is rendered so accurately that today Palauans can place exactly where Jacoulet was standing when he painted this couple. This 1929 work is one of the field paintings that Jacoulet used as the basis for a wood-block print composition, which he completed in his Tokyo studio six years later (Fig. 13b). Look at the transformation from field painting to finished woodblock print. Santiago has vanished and the complex composition has become 2nd Marianas History Conference 2013 ・ !3