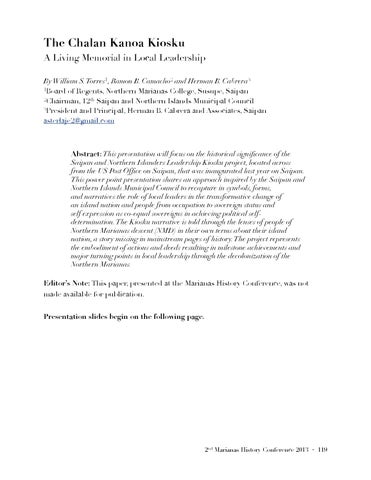 The Chalan Kanoa Kiosku A Living Memorial in Local Leadership

Abstract: This presentation will focus on the historical significance of the Saipan and Northern Islanders Leadership Kiosku project, located across from the US Post Office on Saipan, that was inaugurated last year on Saipan. This power point presentation shares an approach inspired by the Saipan and Northern Islands Municipal Council to recapture in symbols, forms, and narratives the role of local leaders in the transformative change of an island nation and people from occupation to sovereign status and self expression as co-equal sovereigns in achieving political selfdetermination. The Kiosku narrative is told through the lenses of people of Northern Marianas descent (NMD) in their own terms about their island nation, a story missing in mainstream pages of history. The project represents the embodiment of actions and deeds resulting in milestone achievements and major turning points in local leadership through the decolonization of the Northern Marianas. Editor’s Note: This paper, presented at the Marianas History Conference, was not made available for publication.