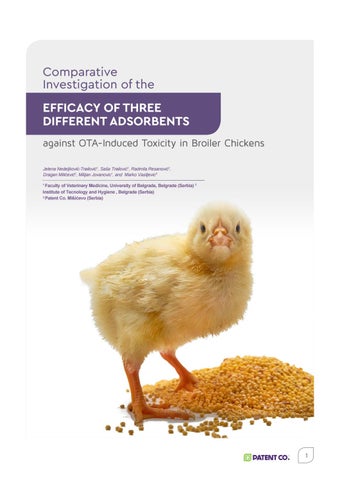 Study AIM The aim of our study was to determine the efficacy of three different adsorbents, inorganic (modified zeolite), organic (esterified glucomannans) and mixed (inorganic and organic components, with the addition of enzymes), in protecting broilers from the toxic effects of Ochratoxin A in feed.

Animals Broilers were fed diets containing 2 mg/kg of Ochratoxin A (OTA) and supplemented with adsorbents at the recommended concentration of 2 g/kg for 21 days.

weight, lower weight gain, increased feed conversion and induced histopathological changes in the liver and kidneys. The presence of inorganic, organic and mixed adsorbents in contaminated feed only partially reduced the negative effects of OTA on the broiler performances: Body weight: broilers that were fed with adsorbentsupplemented feed reached higher body weight in comparison to the group that only received OTA. + 17,96% with the treatment with the inorganic adsorbent + 19,09% with the treatment with the organic adsorbent + 13,59% with the mixed adsorbents

The applied adsorbents have also reduced the intensity

in broilers were reduced, but

of histopathological changes caused by OTA; however,

they were not able to prevent their onset.