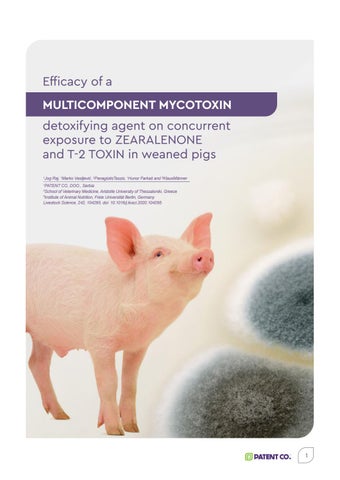 OBJECTIVE The aim of this in vivo study was to evaluate the efficacy of a novel multicomponent mycotoxin detoxifying agent as a mineral premix consisting of modified zeolite, Bacillus spp., yeast cell wall and silymarin (MMDA; Patent Co, Misicevo, Serbia) administered through feed in weaned pigs in feed to adsorb mycotoxins zearalenone (ZEN) and T-2.

without any mycotoxins or MMDA.

contamination levels with G2 group) with the addition of 1 g MMDA/kg.

contamination levels with G2 group) with the addition

the 66th day of age (end of trial) were allocated in four trial groups. Each group consisted of 28 pigs placed in seven pens (replicates) with four animals in each pen.

Results suggested that inclusion of MMDA in trial diets induced dosedependent reduction of genital organ relative weight (ovaries, cornu uteri and vagina-vestibule) and vulva size, which had been increased due to ZEN ingestion in G2 group. Additionally, in both groups that received MMDA, significantly reduced residue levels of ZEN in liver and kidney samples were observed, in comparison with G2 group. A significant reduction of the residue levels of T-2/HT-2 toxins was also observed in kidney samples of MMDA-fed groups when compared with G2 group.

Taken together, MMDA added to diets containing ZEN and T-2 toxin has a dosedependent affinity for ZEN and, to a lower extent, for T2 toxin, whereas its beneficial effects seem to be greater at inclusion levels of 3 g MMDA/kg feed. Efficacy of a multicomponent mycotoxin detoxifying agent on weaned pigs

Efficacy of a multicomponent mycotoxin detoxifying agent on weaned pigs