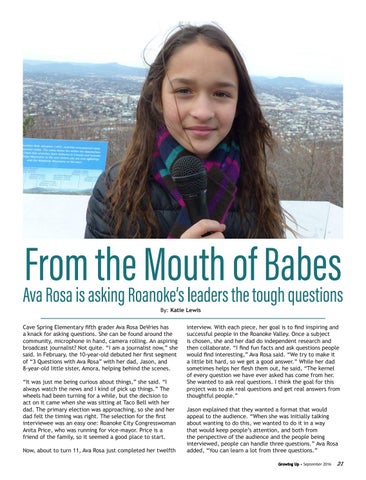 From the Mouth of Babes Ava Rosa is asking Roanoke’s leaders the tough questions By: Katie Lewis

Cave Spring Elementary fifth grader Ava Rosa DeVries has a knack for asking questions. She can be found around the community, microphone in hand, camera rolling. An aspiring broadcast journalist? Not quite. “I am a journalist now,” she said. In February, the 10-year-old debuted her first segment of “3 Questions with Ava Rosa” with her dad, Jason, and 8-year-old little sister, Amora, helping behind the scenes. “It was just me being curious about things,” she said. “I always watch the news and I kind of pick up things.” The wheels had been turning for a while, but the decision to act on it came when she was sitting at Taco Bell with her dad. The primary election was approaching, so she and her dad felt the timing was right. The selection for the first interviewee was an easy one: Roanoke City Congresswoman Anita Price, who was running for vice-mayor. Price is a friend of the family, so it seemed a good place to start. Now, about to turn 11, Ava Rosa just completed her twelfth

interview. With each piece, her goal is to find inspiring and successful people in the Roanoke Valley. Once a subject is chosen, she and her dad do independent research and then collaborate. “I find fun facts and ask questions people would find interesting,” Ava Rosa said. “We try to make it a little bit hard, so we get a good answer.” While her dad sometimes helps her flesh them out, he said, “The kernel of every question we have ever asked has come from her. She wanted to ask real questions. I think the goal for this project was to ask real questions and get real answers from thoughtful people.” Jason explained that they wanted a format that would appeal to the audience. “When she was initially talking about wanting to do this, we wanted to do it in a way that would keep people’s attention, and both from the perspective of the audience and the people being interviewed, people can handle three questions.” Ava Rosa added, “You can learn a lot from three questions.” Growing Up • September 2016

Growing Up In the Valley September 2016

Growing Up In the Valley September 2016