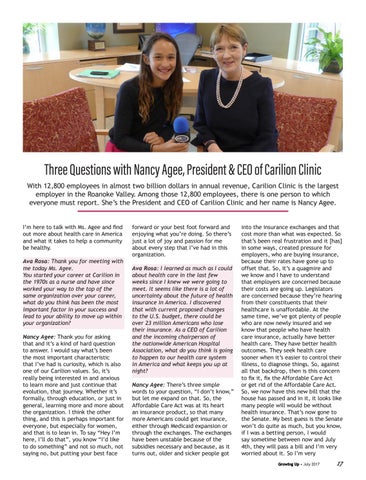 Three Questions with Nancy Agee, President & CEO of Carilion Clinic With 12,800 employees in almost two billion dollars in annual revenue, Carilion Clinic is the largest employer in the Roanoke Valley. Among those 12,800 employees, there is one person to which everyone must report. She’s the President and CEO of Carilion Clinic and her name is Nancy Agee. I’m here to talk with Ms. Agee and find out more about health care in America and what it takes to help a community be healthy. Ava Rosa: Thank you for meeting with me today Ms. Agee. You started your career at Carilion in the 1970s as a nurse and have since worked your way to the top of the same organization over your career, what do you think has been the most important factor in your success and lead to your ability to move up within your organization? Nancy Agee: Thank you for asking that and it’s a kind of hard question to answer. I would say what’s been the most important characteristic that I’ve had is curiosity, which is also one of our Carilion values. So, it’s really being interested in and anxious to learn more and just continue that evolution, that journey. Whether it’s formally, through education, or just in general, learning more and more about the organization. I think the other thing, and this is perhaps important for everyone, but especially for women, and that is to lean in. To say “Hey I’m here, I’ll do that”, you know “I’d like to do something” and not so much, not saying no, but putting your best face

forward or your best foot forward and enjoying what you’re doing. So there’s just a lot of joy and passion for me about every step that I’ve had in this organization. Ava Rosa: I learned as much as I could about health care in the last few weeks since I knew we were going to meet. It seems like there is a lot of uncertainty about the future of health insurance in America. I discovered that with current proposed changes to the U.S. budget, there could be over 23 million Americans who lose their insurance. As a CEO of Carilion and the incoming chairperson of the nationwide American Hospital Association, what do you think is going to happen to our health care system in America and what keeps you up at night? Nancy Agee: There’s three simple words to your question, “I don’t know,” but let me expand on that. So, the Affordable Care Act was at its heart an insurance product, so that many more Americans could get insurance, either through Medicaid expansion or through the exchanges. The exchanges have been unstable because of the subsidies necessary and because, as it turns out, older and sicker people got

into the insurance exchanges and that cost more than what was expected. So that’s been real frustration and it [has] in some ways, created pressure for employers, who are buying insurance, because their rates have gone up to offset that. So, it’s a quagmire and we know and I have to understand that employers are concerned because their costs are going up. Legislators are concerned because they’re hearing from their constituents that their healthcare is unaffordable. At the same time, we’ve got plenty of people who are now newly insured and we know that people who have health care insurance, actually have better health care. They have better health outcomes. They seek health care sooner when it’s easier to control their illness, to diagnose things. So, against all that backdrop, then is this concern to fix it, fix the Affordable Care Act or get rid of the Affordable Care Act. So, we now have this new bill that the house has passed and in it, it looks like many people will would be without health insurance. That’s now gone to the Senate. My best guess is the Senate won’t do quite as much, but you know, if I was a betting person, I would say sometime between now and July 4th, they will pass a bill and I’m very worried about it. So I’m very Growing Up • July 2017

Growing Up In the Valley July 2017

Growing Up In the Valley July 2017