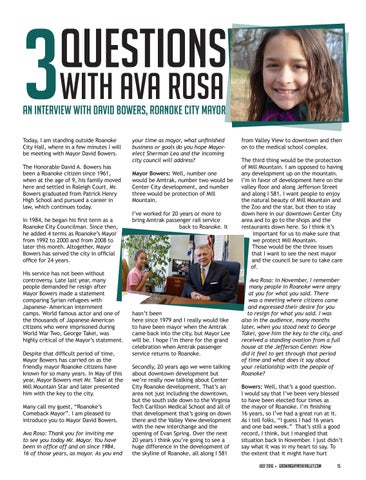 An interview with David Bowers, Roanoke City Mayor Today, I am standing outside Roanoke City Hall, where in a few minutes I will be meeting with Mayor David Bowers. The Honorable David A. Bowers has been a Roanoke citizen since 1961, when at the age of 9, his family moved here and settled in Raleigh Court. Mr. Bowers graduated from Patrick Henry High School and pursued a career in law, which continues today. In 1984, he began his first term as a Roanoke City Councilman. Since then, he added 4 terms as Roanoke’s Mayor from 1992 to 2000 and from 2008 to later this month. Altogether, Mayor Bowers has served the city in official office for 24 years. His service has not been without controversy. Late last year, many people demanded he resign after Mayor Bowers made a statement comparing Syrian refugees with Japanese- American internment camps. World famous actor and one of the thousands of Japanese American citizens who were imprisoned during World War Two, George Takei, was highly critical of the Mayor’s statement. Despite that difficult period of time, Mayor Bowers has carried on as the friendly mayor Roanoke citizens have known for so many years. In May of this year, Mayor Bowers met Mr. Takei at the Mill Mountain Star and later presented him with the key to the city. Many call my guest, “Roanoke’s Comeback Mayor”. I am pleased to introduce you to Mayor David Bowers. Ava Rosa: Thank you for inviting me to see you today Mr. Mayor. You have been in office off and on since 1984, 16 of those years, as mayor. As you end

your time as mayor, what unfinished business or goals do you hope Mayorelect Sherman Lea and the incoming city council will address? Mayor Bowers: Well, number one would be Amtrak, number two would be Center City development, and number three would be protection of Mill Mountain. I’ve worked for 20 years or more to bring Amtrak passenger rail service back to Roanoke. It

hasn’t been here since 1979 and I really would like to have been mayor when the Amtrak came back into the city, but Mayor Lee will be. I hope I’m there for the grand celebration when Amtrak passenger service returns to Roanoke. Secondly, 20 years ago we were talking about downtown development but we’re really now talking about Center City Roanoke development. That’s an area not just including the downtown, but the south side down to the Virginia Tech Carillion Medical School and all of that development that’s going on down there and the Valley View development with the new interchange and the opening of Evan Spring. Over the next 20 years I think you’re going to see a huge difference in the development of the skyline of Roanoke, all along I 581

from Valley View to downtown and then on to the medical school complex. The third thing would be the protection of Mill Mountain. I am opposed to having any development up on the mountain. I’m in favor of development here on the valley floor and along Jefferson Street and along I 581. I want people to enjoy the natural beauty of Mill Mountain and the Zoo and the star, but then to stay down here in our downtown Center City area and to go to the shops and the restaurants down here. So I think it’s important for us to make sure that we protect Mill Mountain. Those would be the three issues that I want to see the next mayor and the council be sure to take care of. Ava Rosa: In November, I remember many people in Roanoke were angry at you for what you said. There was a meeting where citizens came and expressed their desire for you to resign for what you said. I was also in the audience, many months later, when you stood next to George Takei, gave him the key to the city, and received a standing ovation from a full house at the Jefferson Center. How did it feel to get through that period of time and what does it say about your relationship with the people of Roanoke? Bowers: Well, that’s a good question. I would say that I’ve been very blessed to have been elected four times as the mayor of Roanoke. I’m finishing 16 years, so I’ve had a great run at it. As I tell folks, “I guess I had 16 years and one bad week.” That’s still a good record, I think, but I mangled that situation back in November. I just didn’t say what it was in my heart to say. To the extent that it might have hurt JUly 2016 • growingupinthevalley.com

Growing Up In the Valley July 2016

Growing Up In the Valley July 2016