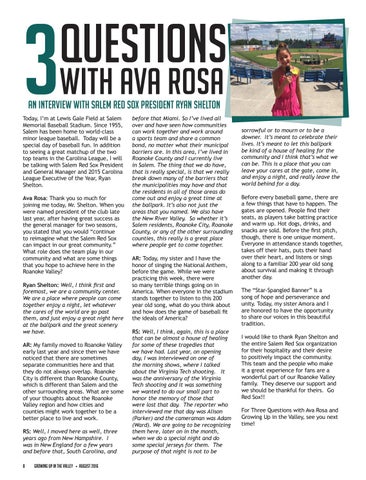 Today, I’m at Lewis Gale Field at Salem Memorial Baseball Stadium. Since 1955, Salem has been home to world-class minor league baseball. Today will be a special day of baseball fun. In addition to seeing a great matchup of the two top teams in the Carolina League, I will be talking with Salem Red Sox President and General Manager and 2015 Carolina League Executive of the Year, Ryan Shelton. Ava Rosa: Thank you so much for joining me today, Mr. Shelton. When you were named president of the club late last year, after having great success as the general manager for two seasons, you stated that you would “continue to reimagine what the Salem Red Sox can impact in our great community.” What role does the team play in our community and what are some things that you hope to achieve here in the Roanoke Valley? Ryan Shelton: Well, I think first and foremost, we are a community center. We are a place where people can come together enjoy a night, let whatever the cares of the world are go past them, and just enjoy a great night here at the ballpark and the great scenery we have. AR: My family moved to Roanoke Valley early last year and since then we have noticed that there are sometimes separate communities here and that they do not always overlap. Roanoke City is different than Roanoke County, which is different than Salem and the other surrounding areas. What are some of your thoughts about the Roanoke Valley region and how cities and counties might work together to be a better place to live and work. RS: Well, I moved here as well, three years ago from New Hampshire. I was in New England for a few years and before that, South Carolina, and 8

before that Miami. So I’ve lived all over and have seen how communities can work together and work around a sports team and share a common bond, no matter what their municipal barriers are. In this area, I’ve lived in Roanoke County and I currently live in Salem. The thing that we do have, that is really special, is that we really break down many of the barriers that the municipalities may have and that the residents in all of those areas do come out and enjoy a great time at the ballpark. It’s also not just the areas that you named. We also have the New River Valley. So whether it’s Salem residents, Roanoke City, Roanoke County, or any of the other surrounding counties, this really is a great place where people get to come together. AR: Today, my sister and I have the honor of singing the National Anthem, before the game. While we were practicing this week, there were so many terrible things going on in America. When everyone in the stadium stands together to listen to this 200 year old song, what do you think about and how does the game of baseball fit the ideals of America? RS: Well, I think, again, this is a place that can be almost a house of healing for some of these tragedies that we have had. Last year, on opening day, I was interviewed on one of the morning shows, where I talked about the Virginia Tech shooting. It was the anniversary of the Virginia Tech shooting and it was something we wanted to do our small part to honor the memory of those that were lost that day. The reporter who interviewed me that day was Alison (Parker) and the cameraman was Adam (Ward). We are going to be recognizing them here, later on in the month, when we do a special night and do some special jerseys for them. The purpose of that night is not to be

sorrowful or to mourn or to be a downer. It’s meant to celebrate their lives. It’s meant to let this ballpark be kind of a house of healing for the community and I think that’s what we can be. This is a place that you can leave your cares at the gate, come in, and enjoy a night, and really leave the world behind for a day. Before every baseball game, there are a few things that have to happen. The gates are opened. People find their seats, as players take batting practice and warm up. Hot dogs, drinks, and snacks are sold. Before the first pitch, though, there is one unique moment. Everyone in attendance stands together, takes off their hats, puts their hand over their heart, and listens or sings along to a familiar 200 year old song about survival and making it through another day. The “Star-Spangled Banner” is a song of hope and perseverance and unity. Today, my sister Amora and I are honored to have the opportunity to share our voices in this beautiful tradition. I would like to thank Ryan Shelton and the entire Salem Red Sox organization for their hospitality and their desire to positively impact the community. This team and the people who make it a great experience for fans are a wonderful part of our Roanoke Valley family. They deserve our support and we should be thankful for theirs. Go Red Sox!! For Three Questions with Ava Rosa and Growing Up in the Valley, see you next time!

Growing Up In the Valley August 2016

Growing Up In the Valley August 2016