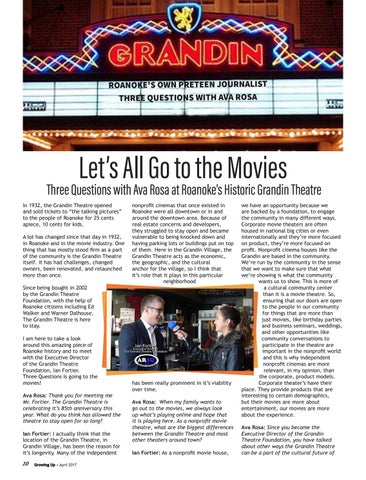 Let’s All Go to the Movies

nonprofit cinemas that once existed in Roanoke were all downtown or in and around the downtown area. Because of real estate concerns and developers, they struggled to stay open and became vulnerable to being knocked down and having parking lots or buildings put on top of them. Here in the Grandin Village, the Grandin Theatre acts as the economic, the geographic, and the cultural anchor for the village, so I think that it’s role that it plays in this particular neighborhood

has been really prominent in it’s viability over time. Ava Rosa: When my family wants to go out to the movies, we always look up what’s playing online and hope that it is playing here. As a nonprofit movie theatre, what are the biggest differences between the Grandin Theatre and most other theaters around town? Ian Fortier: As a nonprofit movie house,

we have an opportunity because we are backed by a foundation, to engage the community in many different ways. Corporate movie theaters are often housed in national big cities or even internationally and they’re more focused on product, they’re more focused on profit. Nonprofit cinema houses like the Grandin are based in the community. We’re run by the community in the sense that we want to make sure that what we’re showing is what the community wants us to show. This is more of a cultural community center than it is a movie theatre. So, ensuring that our doors are open to the people in our community for things that are more than just movies, like birthday parties and business seminars, weddings, and other opportunities like community conversations to participate in the theatre are important in the nonprofit world and this is why independent nonprofit cinemas are more relevant, in my opinion, than the corporate, product models. Corporate theater’s have their place. They provide products that are interesting to certain demographics, but their movies are more about entertainment, our movies are more about the experience. Ava Rosa: Since you became the Executive Director of the Grandin Theatre Foundation, you have talked about other ways the Grandin Theatre can be a part of the cultural future of

Growing Up In the Valley April 2017

Growing Up In the Valley April 2017