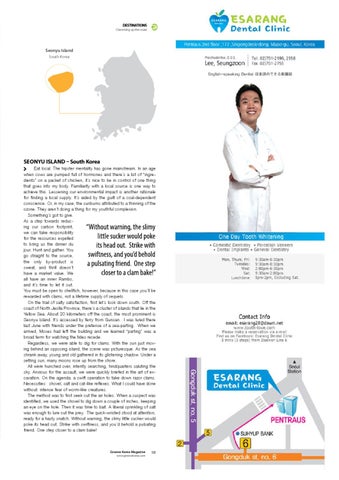 Clamming up the coast

SEONYU ISLAND – South Korea Eat local: The hipster mentality has gone mainstream. In an age when cows are pumped full of hormones and there’s a list of “ingredients” on a packet of chicken, it’s nice to be in control of one thing that goes into my body. Familiarity with a local source is one way to achieve this. Lessening our environmental impact is another rationale for finding a local supply. It’s aided by the guilt of a coal-dependent conscience. Or, in my case, the sunburns attributed to a thinning of the ozone. They aren’t doing a thing for my youthful complexion. Something’s got to give. As a step towards reducing our carbon footprint, we can take responsibility for the resources expelled to bring us the dinner du jour. Hunt and gather. You go straight to the source, the only by-product is sweat, and thrill doesn’t have a market value. We all have an inner Rambo, and it’s time to let it out. You must be open to shellfish, however, because in this case you’ll be rewarded with clams, not a lifetime supply of sequels. On the trail of salty satisfaction, first let’s look down south. Off the coast of North Jeolla Province, there’s a cluster of islands that lie in the Yellow Sea. About 20 kilometers off the coast, the most prominent is Seonyu Island. It’s accessed by ferry from Gunsan. I was lured there last June with friends under the pretense of a sea-parting. When we arrived, Moses had left the building and we learned “parting” was a broad term for watching the tides recede. Regardless, we were able to dig for clams. With the sun just moving behind an opposing island, the scene was picturesque. As the sea shrank away, young and old gathered in its glistening shadow. Under a setting sun, many moons rose up from the shore. All were hunched over, intently searching, hindquarters saluting the sky. Anxious for the assault, we were quickly briefed in the art of excavation. On the agenda: a swift operation to take down razor clams. Necessities: shovel, salt and cat-like reflexes. What I could have done without: intense fear of worm-like creatures. The method was to first seek out the air holes. When a suspect was identified, we used the shovel to dig down a couple of inches, keeping an eye on the hole. Then it was time to bait. A liberal sprinkling of salt was enough to lure out the prey. The quick-wristed stood at attention, ready for a hasty snatch. Without warning, the slimy little sucker would poke its head out. Strike with swiftness, and you’d behold a pulsating friend. One step closer to a clam bake!

Korea's No. 1 expat magazine for community news, events, sports, restaurants and travel. This month we offer dozens of community events. We also feature stories on xenophobia, romance, concerts, domestic and international travel, and so much more. 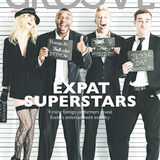