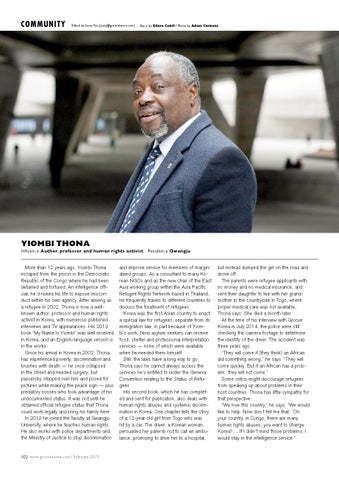 More than 12 years ago, Yiombi Thona escaped from the prison in the Democratic Republic of the Congo where he had been detained and tortured. An intelligence official, he’d risked his life to expose misconduct within his own agency. After arriving as a refugee in 2002, Thona is now a wellknown author, professor and human rights activist in Korea, with numerous published interviews and TV appearances. His 2013 book “My Name Is Yiombi” was well received in Korea, and an English-language version is in the works. Since his arrival in Korea in 2002, Thona has experienced poverty, discrimination and brushes with death — he once collapsed in the street and needed surgery, but passersby stepped over him and posed for pictures while making the peace sign — plus predatory bosses who took advantage of his undocumented status. It was not until he obtained official refugee status that Thona could work legally and bring his family here. In 2013 he joined the faculty at Gwangju University, where he teaches human rights. He also works with police departments and the Ministry of Justice to stop discrimination

and improve service for members of marginalized groups. As a consultant to many Korean NGOs and as the new chair of the East Asia working group within the Asia Pacific Refugee Rights Network based in Thailand, he frequently travels to different countries to discuss the treatment of refugees. Korea was the first Asian country to enact a special law for refugees, separate from its immigration law, in part because of Yiombi’s work. Now asylum seekers can receive food, shelter and professional interpretation services — none of which were available when he needed them himself. Still, the laws have a long way to go; Thona says he cannot always access the services he’s entitled to under the Geneva Convention relating to the Status of Refugees. His second book, which he has completed and sent for publication, also deals with human rights abuses and systemic discrimination in Korea. One chapter tells the story of a 12-year-old girl from Togo who was hit by a car. The driver, a Korean woman, persuaded her parents not to call an ambulance, promising to drive her to a hospital,

but instead dumped the girl on the road and drove off. The parents were refugee applicants with no money and no medical insurance, and sent their daughter to live with her grandmother in the countryside in Togo, where proper medical care was not available, Thona says. She died a month later. At the time of his interview with Groove Korea in July 2014, the police were still checking the camera footage to determine the identity of the driver. The accident was three years ago. “They will come if (they think) an African did something wrong,” he says. “They will come quickly. But if an African has a problem, they will not come.” Some critics might discourage refugees from speaking up about problems in their host countries. Thona has little sympathy for that perspective. “We love this country,” he says. “We would like to help. Now don’t tell me that, ‘Oh, your country, in Congo, there are many human rights abuses, you want to change Korea? ... If I didn’t mind those problems, I would stay in the intelligence service.”