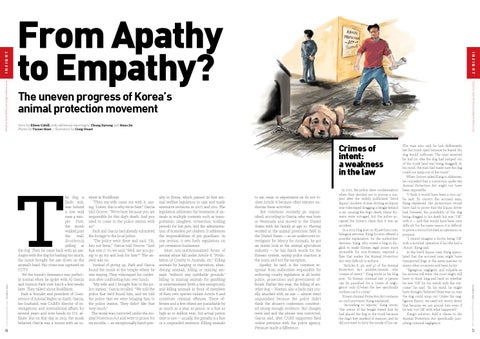 he dog, a Jindo mix, was behind a low wall near a temple. First, the monk walked past the wall, drunkenly yelling at the dog. Then he came back with an axe. Angry with the dog for barking too much, the monk brought the axe down on the animal’s head. His crime was captured on CCTV. Yet the monk’s demeanor was perfectly normal when he spoke with AJ Garcia and Soyoun Park over lunch a few weeks later. They talked about Buddhism. Park is founder and president of Coexistence of Animal Rights on Earth. Garcia, her husband, was CARE’s director of investigations and international affairs for several years and now heads its U.S. affiliate. But on that day in 2012, the monk believed Garcia was a tourist with an in-

Crimes of intent: a weakness in the law terest in Buddhism. “Then my wife came out with it, saying, ‘Listen, this is why we’re here,” Garcia told Groove. “We’re here because you are responsible for this dog’s death. And you need to come to the police station with us.’” Park and Garcia had already submitted the footage to the local police. “The police went there and said, ‘Oh, he’s not there,’” Garcia told Groove. “And that was it. So we said, ‘Well, are you going to go try and look for him?’” The answer was no. Instead of giving up, Park and Garcia found the monk at the temple where he was staying. They videotaped his confession after confronting him over lunch. “My wife and I brought him to the police station,” Garcia recalled. “We told the police that we’d found him, and we told the police that we were bringing him to the police station. They didn’t like that very much.” The monk was convicted under the Animal Protection Act and went to prison for six months — an exceptionally harsh pen-

alty in Korea, which passed its first animal welfare legislation in 1991 and made extensive revisions in 2007 and 2011. The legislation addresses the treatment of animals in multiple contexts such as transportation, slaughter, vivisection, holding periods for lost pets, and the administration of homeless pet shelters. It addresses the responsibilities of pet guardians. In one section, it sets forth regulations on pet cremation businesses. Most non-institutionalized forms of animal abuse fall under Article 8, “Prohibition of Cruelty to Animals, etc.” Killing animals by hanging or starvation, abandoning animals, killing or injuring animals “without any justifiable grounds,” killing or injuring animals for gambling or entertainment (with a few exceptions), and killing animals in front of members of their own species violate Article 8 and constitute criminal offenses. These offenses and a few others are punishable by as much as a year in prison or a fine as high as 10 million won, but actual prison time is rare — usually, the penalty is a fine or a suspended sentence. Killing animals

to eat, wear, or experiment on do not violate Article 8 because other statutes authorize these activities. But violations routinely go unpunished, according to Garcia, who was born in Venezuela and moved to the United States with his family at age 10. Having worked in the animal protection field in the United States — as an undercover investigator for Mercy for Animals, he got an inside look at the animal agriculture industry — he has harsh words for the Korean system, saying police inaction is the norm and not the exception. Apathy, he said, is the common response from authorities responsible for enforcing cruelty legislation at all levels: police, prosecutors and government officials. Earlier this year, the killing of another dog — Haetari, also a Jindo mix cruelly attacked with an axe — almost went unpunished because the police didn’t think the abuser’s confession constituted strong enough evidence. But charges were laid and the abuser was convicted, Garcia said, after CARE supporters filed online petitions with the police agency. Pressure made a difference.

In 2012, the police drew condemnation when they decided not to pursue a suspect after the widely publicized “Devil Equus” incident. A man driving an Equus was videotaped dragging a beagle behind a car, causing the dog’s death. Many Koreans were outraged, but the police accepted the driver’s claim that it was an accident. In a 2013 blog post on KLawGuru.com, bilingual attorney Kang Ju-won offered a possible explanation for the authorities’ decision. Kang, who writes a blog in English to make Korean legal issues more accessible for non-Koreans, exposed a flaw that makes the Animal Protection Act very difficult to enforce. “Articles 8, 46, and 47 of the Animal Protection Act prohibit/punish only ‘crimes of intent,’” Kang wrote in his blog post. “In Korean criminal law, a person can be punished for a ‘crime of negligence’ only if/when the law specifically outlines such a crime.” Korea’s Animal Protection Act contains no such provision, Kang explained. “According to reports,” Kang wrote, “the owner of the beagle stated that he had placed the dog in the trunk because the dog’s feet smelled of manure, and he did not want to dirty the inside of his car.

The man also said he had deliberately left the trunk open because he feared the dog would suffocate. The man asserted he had no idea the dog had jumped out of the trunk (and was being dragged). In his mind, the man had made sure the dog could not jump out of the trunk.” When Groove asked Kang to elaborate, he conceded that a conviction under the Animal Protection Act might not have been impossible. “I think it would have been a toss-up,” he said. To convict the accused man, Kang explained, the prosecution would have had to prove that the Equus driver had foreseen the possibility of the dog being dragged to his death but was “OK” with it — and that would have been very difficult, for the same reason it is difficult to prove a doctor botched an operation on purpose. “I cannot imagine a doctor being ‘OK’ with a botched operation if he/she had a choice,” Kang said. In the Devil Equus case, Kang speculated that the accused man might have transported dogs in the same manner on many other occasions and been lucky. “Egregious, negligent, and culpable as his actions still were, the court might still have to think long and hard on whether he was ‘OK’ (in his mind) with the outcome,” he said. “In his mind, he might have thought/believed there was no way the dog could jump out. Under the negligence theory, we need not worry about that because we can punish him even if he was ‘not OK’ with what happened.” Kang’s solution: Add a clause to the Animal Protection Act specifically punishing criminal negligence.

From Apathy to Empathy?