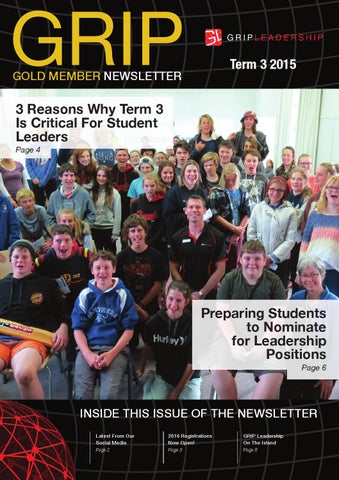 GRIP Leadership On The Island Page 8

REGISTRATIONS NOW OPEN! Register now for the GRIP STudent Leadership Conference Near You!

3 Below are the 3 reasons we believe that Term 3 is critical for student leaders.

Student leaders still have time to achieve any goals they feel have passed by.

At the beginning of the year did the student leaders set any goals or discuss ideas of things that have since been forgotten? It is easy for student leaders to say “the year is now over half way through, we missed our chance”. The truth may be that if they leave it much longer they may well miss their chance. However, it is still early in Term 3 and there is still plenty of time left to achieve a few of those forgotten goals. If student leaders get their act together quickly there is still time. This is the reality, and often all we need to do is be honest and admit there is still enough time to follow through on the goals and ideas that had otherwise been lost or forgotten. It might take more focus, discipline and team work but it is definitely possible. Practical Tip: Ask the student leaders to revisit the goals that were discussed at the beginning of the year and see which ones are possible to achieve this term. Then have them list out all the possible goals and prioritise each one in order of most viable to least viable.

There is often a little more flexibility in the school calendar.

Schools are usually busy places. Term 3 will be busy too. But let’s face it… we tell ourselves that term 1 and 4 are packed because they are the beginning and end of the year. We also believe that term 2 and 4 usually have extra tests and assignments. So what about Term 3? No doubt Term 3 also has important activities, but perhaps it’s also the best time to schedule a major leadership team event or activity? Practical Tip: Check out the school calendar to see what Term 3 looks like in terms of already scheduled events. If there is time in the schedule to plan and run an event or activity, have the student leaders discuss what they think they could plan and execute well in that amount of time.

Next year’s student leaders are watching you.

Leaders are always being watched, whether they know it or not. At GRIP Leadership we encourage student leaders to see this as a good thing rather than a scary thing… it means that they have the ability to influence others just by doing the right thing. During Term 3 many younger students begin thinking about whether they are interested in nominating for leadership roles for next year. If the current leadership team is being active and making a big difference, then this will paint a strong picture for the next year’s leaders. In short, if student leaders have a big Term 3, then they can help inspire next year’s leaders to have a big year! Practical Tip: Have the student leaders write down the behaviours and actions that they want next year’s leaders to have and do. A few examples are having a great attitude, a willingness to serve others and volunteer themselves, to act with integrity and encourage and support other students. Then challenge the student leaders to model these in some way each day this term. One shortfall student leaders make is thinking that there is not enough time to do “the big thing” they truly feel will make a difference. If they understand the power and influence that comes from doing the small things with excellence, along with time management, teamwork and focussing on their goals, then Term 3 will be an excellent opportunity to make a difference.

2016 ach year, a fresh group of aspiring student leaders are given the opportunity to step forward and nominate for school leadership positions. Depending on the students, they may want to approach their teachers to discuss this, and teachers may also wish to approach specific students to chat about the possibility of nomination. Teachers can, of course, leave students completely to their own devices - but this process affords a wonderful opportunity for intentional student development, regardless of whether the student(s) actually obtain an official leadership position or not. In light of this opportunity, there are some guiding ideas on the next page that can assist in shaping the direction and growth of potential student leaders. Continued on the next page.

Make it a learning process.

A great way to help students maintain perspective during this new and sometimes challenging experience is to remind them that it is an opportunity for growth. The process that they are about to undertake will teach them more about leadership, and about themselves – regardless of the position. If a student learns to appreciate an experience as an opportunity to learn more about themselves, then words like ‘success’ or ‘failure’ cease to be the only suitable measurements. Therefore students have a chance to develop a more balanced, objective view. Additionally, highlighting the developmental nature of nominating as a student leader allows them to observe and reflect upon the strengths and leadership styles of other candidates. Our world (and school) can be so focused on competition and comparison at times; it is healthy to provide opportunities where students can appreciate one another, rather than simply placing themselves and others in a ‘pecking order’. Helping students to see experiences as learning opportunities lays an important foundation for future flexibility and maturity.

3 Look at the specific roles and

responsibilities of the positions.

Often students will put their names forward for a position without understanding the position’s requirements or responsibilities. To succeed at any task, understanding the expectations and what ‘success’ looks like is essential. As a teacher working alongside aspiring student leaders, consider holding an open meeting for all students to attend. Articulate each leadership role, with a focus on the relevant opportunities and responsibilities proper to each. This will help to de-mystify each role, and allow the students to begin to match their abilities, skills and talents to one or more of the available positions. It can also provide students the chance to discuss leadership positions with their peers in a more informed manner, which in turn can lead to a more considered and engaged group of nominees.

“The goal is to highlight that a leadership position is secondary to positive influence, and that influence is the true measure of leadership. It is the qualities and actions of a person, and not the lustre of their badge that make a true leader.”

2 Look beyond the school for inspiration. Students and teachers alike may not really be looking for another project or assignment, but an informal examination of leaders in society can shape meaningful discussion between aspiring leaders. It creates a larger context forming around the nomination process – helping to insulate it against the anxiety that can sometimes be present in these processes. The nomination process also affords teachers the opportunity to highlight the relationship between ‘leadership as position’ and ‘leadership as influence’. Parents and teachers are great examples to start with. Even extending beyond that to examine other members of society who have significant influence, but little to no public profile. The goal is to highlight that a leadership position is secondary to positive influence, and that influence is the true measure of leadership. It is the qualities and actions of a person, and not the lustre of their badge that make a true leader.

4 Reflection – what do I have to give? Looking reflectively (with the help of wise guidance) will enable students to discover a broader range of helpful gifts and talents that can be used to serve others. Teachers have the chance to expand their student’s thinking by looking at previously overlooked characteristics of leaders. This helps potential nominees feel more capable to lead. Important aspects of leadership such as patience, listening skills and the ability to see a task through from start to finish are rarely mentioned in the same breath as more stereotypical characteristics, such as decisiveness or strength, but are no less significant. As students begin to see a broader range of qualities present in great leaders, they have more ability to identify as someone who can be themselves in order to lead and influence others in a positive way. These four ideas are just a starting point, and as always will need to be tailored to suit the students you work with. At the end of the day, any nomination, interview or audition process that people go through can indeed be a time of growth and learning, but often is takes wise guidance and leadership to ensure that it becomes such.

GRIP Leadership on the Island

n June 2015 the GRIP Leadership team was invited to facilitate a special leadership day for students on Kangaroo Island (situated off the coast of South Australia). Although the population of the island is only a few thousand people, the towns on the island are spread across significant distances. This means that students on the island each attend one of three different schools and are quite isolated from each other.

The GRIP Leadership day brought together the 45 year nine students from all three schools, many whom will soon become the oldest students on their campus. The host school was located in the town of Parndana where the local population is approximately 150 people. Parndana is situated in the middle of the island amongst a mix of red dirt roads and unspoiled bush landscapes. Our team felt privileged to be able to spend the day with such a great group of students who were very enthusiastic for the entire program. One of the core values of GRIP Leadership is that all people have great purpose, so we were grateful to be able to present leadership training to students who would have found it beyond reach to attend a large conference in a mainland city. With the added bonus of some tourist time on the island, our team are certainly hoping to be back in the future!

To watch a short video of highlights from the day visit the GRIP Leadership youtube channel or go directly to: https://youtu.be/ROGSNSLetiY 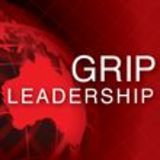