Looking Past, Looking Glass Andy Brumer Aside from all works of art arguably qualifying as metaphors in and of themselves painting in particular lends itself to metaphorical formulations. paintings “are” among other things: a window into the world; a mirror of the soul; visual music; plastic poetry, a heroic journey through the unconscious; a snapshot in time. When thinking about a fitting metaphor for L.A.-based artist Kimberly Brooks’ wonderfully diverse group of paintings (mostly oil on linen) in her show “Brazen,” one of a garden comes to mind. Indeed the artist breezily bathes each work in an atmosphere of gentle pastels and/or earthy and muted browns or greys until the entire gallery breathes with life. Brooks titles her collection “Brazen,” in part to invoke the spirit she needed to follow her muse wherever it led her and to resist calibrating this new work to meet the expectations of others. Indeed, she has succeeded exquisitely as the show presents paintings that are at once intelligent, inventive, invigorating, and original. In “Castle Tapestry,” for example, the artist strategically affixes two strips of gold leaf paper to the canvas ( in some other paintings she uses gold as well as silver leaf paper) in a broad right angle configuration. One “line”

runs parallel to the left side of the canvas, while the other juts across it at a right angle to the first. Together they forge a spiritualized beam and joist that physically “holds” the sketchy outlines of castle-like images up. What’s more, these metallic collaged surfaces simultaneously reflect and absorb the gallery’s light forging a kind of ironic objective correlative to the in-and-out rhythm and motion of breathing and photosynthesis themselves. In “Remembrance,” as in Velasquez’s historically groundbreaking painting, Las Meninas, the doorway becomes an inward leading portal and selfreflective vector that pulls the eye and the curiosity of the viewer inward into the work itself. In so doing Brooks both acknowledges the viewer’s presence and invites/involves him or her to participate in then become a virtual subject of the work itself. Again, the use of gold and silver leaf paper here acts as a compositional element (because the colors are clearly “relating” to each other spatially), while again, doubling as spiritual signs or markers. Brooks shades this architectural interior in an earthy soulful clay-like hue suggestive of an adobe home, while again, the door becomes a magical element freeing and enticing the viewers’ imaginations to pass through en route back into their own lives. Another painting, the subtle and enchanting “Blue Forest” ushers viewers into a fairytale-like dreamscape of protean shapes that transform and transfigure themselves the more people observe them. As a puff of a small tree and an adjacent blue cruciferous leafy plant-like form float in a space of springtime insouciance on the top half of the painting, a row of brightly colored pink forms suggestive of women’s lingerie drying on a clothesline simultaneously waltzes across the piece’s bottom half. The juxtaposition purposely disrupts the otherwise undivided picture plane and functions like a brightly colored John Baldessariesque negative-space/ anti-art blob that both discombobulates the viewer’s attention and turbo charges the painting into a dance. Another painting, “Portrait Hall,” presents a rococo-like parlor room that the artist fills up with lusciously painted furniture and images of large 18th Century English portrait-like paintings. Hanging from the paintings curvaceously curved and decoratively wallpapered walls, these paintings within the painting alluding to Brooks’ own well-known body of figurative paintings and architectural interior works.

Yet rather than showcasing the aesthetics of a bygone era, Brooks “builds” the structural and ornamental fixtures in “Portrait Hall” via broad Abstract Expressionist-like brush strokes. With an almost Cubist’s wit and cunning as well, Brooks seamlessly disguises and camouflages these gestural elements of the painting into a handily crafted and exemplary model of a true postmodern work. This is a strong and inspiring exhibition that showcases the talents of an artist who continues to grow and challenge herself. While Brooks clearly succeeded in corralling her muse’s audacity to help her create these spirited works, the paintings in the manner in which they nourish the eye and nurture the soul eschew all harshness categorically and feel anything but “Brazen” at all. Andy Brumer Los Angeles

A Case For Monarchy

Eye of the World 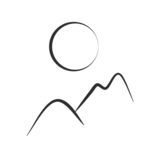