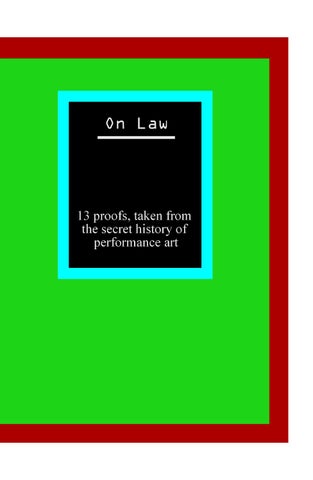 This book is foremost a device used to reclaim material left over from the project &quot;My Table is my Cock (or how to stay sane): installation for a performance for a scenario for an object&quot; by Joel Verwimp.

This publication is a montage of research material on rules of engagement and public complicity. It&#39;s a culmination of three acts of performance art that I was involved in between 2010 and 2013. The booklet, the fourth act of publication, should be understood as contingent on the previous three. &quot;On Law&quot; documents the previous acts but also elaborates, edits, amplifies, and contradicts; the form and content of the public presentations are reinterpreted using tools specific to print. &quot;On Law&quot; insinuates a conventional form the print publication - into a network of activities and presentational strategies particular to a performative praxis, thereby reframing it. The central matter of this publication focusses on the craft of law making through both, machine generated writing (using an early speech recognition beta version software during a live writing performance with Jรถrn J Burmester - the german transcripts in the booklet on page 43 till 48 are in red text) as well as delittant woodworking based on a VerlegtVerlag performance from 2010. The booklet derives not from treating the document as an indexical access point to a past event but from perceiving the document itself as a performance that directly reflects an aesthetic project or sensibility and for which you are the present audience. The final goal of this publication lays in its function as a szenario for future public readings and performances in order to create multiple variations on its notion of making law.

Fourth Letter to an Author

Writing sometimes has a Brechtian “Verfremdungseffekt”, it creates a certain DISTANCE. This is especially true of autobiographical writing, where history can actually be assembled without verity (which is an apt paradox in the context of Verfremdung). Perhaps, each person should write down a history of something at least once in their lives. It helps to redefine the apprehension of DURATION, but also it’s so much fun to do. Apart from merely writing, some artists also author history - as seen in: First woman on the moon by Aleksandra Mir, performed in 1999; camel arriving by Marcel Broodthaers, 1974 and the even older Rose petal jam by Harry Partch, 1969. These performances have shown that the fundaments of performance art are radically non-theatrical and non-poetic even if Tristan Tzara did actually speak as a “tourist guide” at the church in 1921. Against general belief, the fundaments of performance aren’t to be found in the work of Rodchenko either. Not even in the stunning 1518 Renaissance performance parrot room by Raphael. Fundaments are actually of little importance in performance art because the power of each performance resides in the now and its subsequent re-perception through accumulated action, as exemplified in “being” Adrian Piper from 1972, the year I was born.

2. An event for the Post Office, the Police, and the Occupants of no.26 Vaclavkova Street by Milan Knížák, 1966 One year performance (time clock piece) by Tehching Hsieh, 1980 250cm Line Tattooed on 6 paid people by Santiago Sierra, 1999

When I speak of performance art in this story, I speak of reality as it is practised (in a space towards the performative). As a cultural phenomenon, performance art doesn’t relate to anything but only manifests situational behaviour in its moment of appearance. Looking at recent history, one can say that the artistic presentation of let’s say “the politics of immigration detention” in Please love Austria by Christoph Schlingensief, 2000 has the above mentioned clear-cut correspondence (reality) to for example the state of democracy as it is practiced. Of course this can be done poetic or through visual presentation and play. However, performance art is not a medium, form or genre for the simple reason that it is not a tool. Yet, my experience is that people-together-in-a-room is a medium in itself. A performance is thus an act without formal qualities, something you do in the presence of others, not to achieve something else but rather the act in itself. Like any other media, being-with-other-people-in-a-room has the simple potential to change the way we think.

This is not as easy as it may sound. Older examples in my little historical outline still show a preoccupation with the so-called loss of meaning in societal life (which derived from general commodification in all parts of society and made sense in their context and time of production). Contemporary performance art has largely freed itself from such a praxis rooted in 19th century artistic critique. The widespread tendency for artists today is to adopt a paradoxical position in which affect is both rejected and reclaimed: they both, insert themselves into a social network and celebrate the universe of art as such. This new won “freedom” has the potential to DISTANCE the artist from affective labour and the dominant narrative of negation, allowing him or her to play (Brecht upside down).

Something can be mine only if it excludes others who might otherwise own it. This conceptual framework based on negation is called private property. The logic of ownership and DURATION that has guided our understanding of the world of things and relationships no longer answers to the challenge. Most commodities live longer than their creators and consumers alike—for even a simple plastic bag will outlive us all many, many times over. As commodities ourselves, even our bodily organs can outlive us. Therefore, as all objects that enter into this world are commodities (including the body and its kidney stones), we must realize that this is not our world, but rather theirs. We dwell in the world of commodities. For reasons of normative self-understandings of the author, three US events are missing in this story without further explanation: Meat Joy by Carolee Schneemann, 1964; Conversation at the Castle by Mary Jane Jacob, 1996 and It&#39;s an Earthquake in My Heart by Goat Island, 2001.

And, and, and....double, triple ontology, both....and, also...a book, a film and an evening meal all produced live on the spot, simultaneous. In this way, lots of contemporary performance artists reconfigure the notion of time and DURATION from an identifiable, single matter to the common matter of dissemination, presence and resource. This conceptualisation of performance into a “publication” of ensemble, affect and event seems to gain more and more strength while the individual work recedes. Taking this situation one step further is to understand art as an open form that can never be finalised or brought to a definite materialisation. Integrating such an indefinite void into ones artistic praxis facilitates a permanent reappropriation of cultural production. By subscribing to this notion of lacunae, one thus acknowledges every art work as being part of the general commons: reappropriating the commodity, personal and metonymic. (Bye bye negation, hello DISTANCE).

In the 1970s it was not yet possible to conceptualise public discussion as an artistic activity (Joseph Beuys and the Artist Placement Group have both tried it but their actions where never received as such). Today, the production of a dynamic experience for participants has developed into discursive situations where everyone is a producer. General dissatisfactory outcomes of these events are ascribed to endless processes without meaningful materialisation and the lack of disruptive events that could challenge consensus. Dealing with this problem of DURATION, some artistic situations are deliberately constructed as &quot;Too big to fail&quot; (a colloquial term in describing certain financial institutions). This is a very questionable strategy for economics but it might be a good one for art, especially for the MPA-B. At least some marvelous performances have tried to use it, albeit with uneven success: FOOD by Gordon Matta-Clark, 1971; The Battle of Orgreave by Jeremy Deller, 2001 and The Bijlmer Spinoza-Festival by Thomas Hirschhorn, 2009. These projects make reality look strange again, aesthetic (one more Brechtian twist). Such large scale activities are very hard to organize. For most of us this could work out maybe once or twice in a lifetime. Alternatively, performance artists working in non-democratic regimes have shown that performance art can also do without a shared experience of authentic presence and immediacy. Somehow I really like that too.

6. Subscribing to the notion of lacunae, these letters are intended as shared privatised experiences (a collective space amongst mutually trusting colleagues) in which I can freely publish some of my performance art favourites. It is the physical act of publishing (the making of public) - where presence itself is commodified into a “living” object - that grants a space performativity. When the commodity is first and foremost a presence - a mode of being - then, contemporary performance art is affirmative by nature and based on aesthetics of emergence [in the present]. I will start this final list which should exemplify this convergence of DISTANCE and DURATION with three performers each holding a “living” object: Consider the Lobster (Performance Interrupted by Other Artists) by Anya Liftig, 2012; Le saut dans le vide by Yves Klein, 1960 and La Monnaie vivante by Pierre Bal-Blanc, 2006. Three New York ladies sitting in a bar under the sea: Notes on camp by Susan Sontag, 1964; Complete untitled film stills by Cindy Sherman, 1977 and Museum Highlights: a Gallery talk by Andrea Fraser, 1989. Last but not least, three “bad communists” celebrating idiosyncrasy with a handful of friends longing for some privacy: Albums by Ilya Kabakov, 1976; Classic escape by Jan Mlčoch, 1977 and Poliscar (testing) by Krzysztof Wodiczko, 1991. Of course no history of performance art can end without at least mentioning Oscar Masotta to who I dedicate this letter. Verlegt on April sixth 2013

§13 Someone. Someone looks quite good. Someone looking at the boat in the middle. On the table, a plate with a flax oh no! Loaf of bread. I fall asleep, I’m dreaming of a room, all in pink.

ยง13 Ceiling, walls, plush carpeting, drapes to the floor, bulge into the room, in front of the open window. The room is quite large, full of toys and ballerinas, and everything is pink. (I sleep and I dream of a room, a lot of drink, diapers, fluffy carpet and friends).

ยง13 One is old. One is stupid. One laughs. One is curved. One comes around. One goes away.

Â§13 One sighs. One speaks to me. Two look out of the picture. Itâ&amp;#x20AC;&amp;#x2122;s not really kind of you. One says: My verticals are not your Vertical. It says nothing about the horizon (every image has one). For a long time, you can see it on her hair / you can see it their Hair on. Formless mop. Restless concrete. I want to cry, but not much. Her teeth worry me, but not much. Their Teeth reassure me, but not much.

ยง13 Not at all played. Clown faces, rabble, pack to do anything. Can we see beyond forms? I&#39;m finally stupid enough?

ยง13 Barrier controls are personality tests. Personal Creation is a spirit, a product of intellectual electricity and fertility.

More 13: is the work a directory? Mind, and its ability to be a beast. (Mind and its statement)

Â§13 The expression is fleeting. The expression may appeal against the will of the author not be included. The legal concept of the work of thinking is a law.

Next 13: the statement is on paper. The spirit and Therefore, THAT was unlawful.

The basic concept comes from a collaborative writing session with JĂśrn J Burmester at GrĂźntaler9, Berlin as well as the VerlegtVerlag residency at Bains connective, Brussels. The original material has been re-edited for The Performative Curatorial Studio: A project conceived by Judith Lavagna and Lara Merrington (TWIMC) for the Agora Collects festival in collaboration with SAVVY Contemporary: Day #10 The Open Curatorial Studio, Berlin on Sunday, June 23th, 10 am - 5pm.

This publication is the scenario for a series of solo performance events under the general title: My Table is My Cock.

13 proofs, taken from the secret history of performance art. Booklet about poetic materialism for a curatorial performance praxis