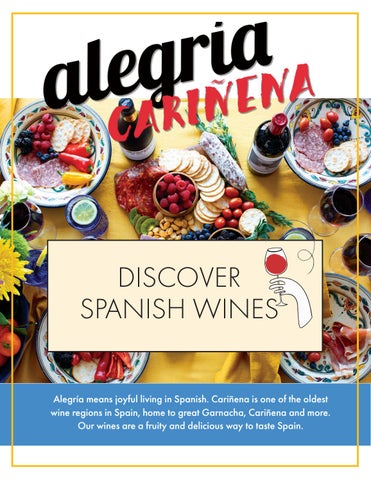 DISCOVER SPANISH WINES Alegría means joyful living in Spanish. Cariñena is one of the oldest wine regions in Spain, home to great Garnacha, Cariñena and more. Our wines are a fruity and delicious way to taste Spain.

DISCOVER SPANISH WINES Spain’s history of wine production dates back to the Romans, but its modern winemaking era is more recent, with many regions coming to prominence after the 1990s. Styles range from fruity and barrel-aged reds to crisp whites and fortified Sherry. Many of the grape varieties are native to Spain, including expressive reds like Tempranillo, Garnacha and Cariñena. Spain has more than 70 official demonaciones de origen (or D.O.s), the local term for wine appellations. With so many regions – and local grapes – to learn, an easy way to start is with the map of Spain. There are four broad climate zones in Spain, and each create unique conditions for wine-growers.

The North of Spain has an Atlantic climate, with coastal influences. This area includes some of the most historic regions associated with the Camino de Santiago, an ancient pilgrim route that started in the Pyrenees and brought travelers and vines to the North. People still make the journey from the Pyrenees to the Atlantic Coast! A few regions to know include Rioja and Ribera del Duero (known for their bold, red Tempranillo wines); Cariñena, the birthplace of Garnacha and Cariñena reds; Navarra, famous for great rosés and the running of the bulls; and Rías Baixas, a wet, coastal region, renowned for refreshing Albariño whites. The Meseta region of central Spain is a large plateau in the middle of the country. If you’re thinking of the plains of Spain, that’s the Meseta. Temperatures are hot and yields are high. The widely-planted Airen white grape comes from here. The East coast of Spain has a Mediterranean climate that runs from Catalunya in the north through Valencia, Yecla and Jumilla to the south. This warm area is cooled by ocean breezes. The region of Priorat sits at higher elevations and delivers elegant and powerful reds, while the Penedès region just beyond Barcelona is bestknown for Spain’s sparkling Cava wines.

Andalusia to the South is the home of flamenco and Sherry, an historic style of light-to-sweet fortified wines that thrives in this hot and dry area.

TAPAS Y VINOS Tapas are festive appetizers and snacks that are traditionally served with wines. Spaniards eat late, and tapas fuel everyone between meals. Tapas range from simple and delicious pairings such as mixed olives, almonds, jamón and chorizo to more complex, small plates like tortilla, bacon-wrapped dates, crispy potatoes and fried baby squid. Like the wines, tapas are inspired by the diversity of Spain’s landscape and fresh ingredients. If you’re planning a trip, leave plenty of time to sample vino at the local tapas bars.

THE BIRTHPLACE OF GARNACHA With its rich history, wealth of old vines, and unbeatable value, WINE ENTHUSIAST MAGAZINE has named Cariñena a top “Wine Region to Watch.” A WORLDY WINE REGION Cariñena is located in the northwest of Spain in the historic Aragón region. Wine talent and ideas have always flowed between the winemakers of northern Spain and France. OLD VINES Cariñena is the birthplace of the Garnacha and Cariñena grapes; winemaking dates back all the way to the Romans. The vines average 40 years and up to a century in age! GREAT VALUE, FRESH FLAVOR Garnacha from Cariñena offers style, balance, and flavor (think strawberry, raspberry, black cherry) – all for excellent value. UNIQUE SOILS Renowned for its ancient stone soils, big sky, and gnarly vines, Cariñena is located in the Ebro Valley, half-way between Barcelona and Madrid. High elevations support a diversity of vineyard plantings. POPULAR GRAPES &amp; STYLES Cariñena produces food-friendly wines from superstar Garnacha and Cariñena grapes, as well as Tempranillo. If you’re a visitor to the area, you’ll eat and drink in style!

FUN FACTS ABOUT CARIÑENA  Home to more old-vine Garnacha than any other region in Spain, including100

 One of the only world wine regions to be named for a grape variety  Travelers to Zaragoza can visit Roman ruins, a Moorish castle, an ancient cathedral and take a tapas crawl – all on a walking tour of the city center.

 One of the oldest regions in Spain, Cariñena offers some of the freshest, most modern wine styles, from juicy reds and whites to cellar-worthy selections.

GREAT GRAPES Cariñena is one of the only regions in the world named for a grape. It’s the birthplace of the Cariñena and Garnacha grapes, now planted from the Rhône Valley in France to California.

AROMA Cariñena (also known as Carignan) has bright raspberry aromas. The best Cariñena comes from older vines which are highly aromatic and fruitforward. TASTE Rich, full-bodied and smooth, Cariñena has lighter tannins than a Cabernet Sauvignon. FOOD PAIRING Cariñena has good acidity and is very versatile with lots of dishes from grilled meats to fish and cheeses.

AROMA Garnacha (also known as Grenache) is a fresh and fruity red, with aromas of black cherry, violets and herbs. TASTE Medium-bodied, Garnacha from Cariñena is sourced from the oldest vines in Spain resulting in great complexity and flavor. FOOD PAIRING Garnacha is a people pleaser of a wine that pairs well with Mediterranean salads, seared tuna and grilled chicken. Winemakers in Cariñena are also blending and aging Garnacha from older vines to add layers of complexity that match well with richer foods and savory sauces.

LEARN MORE about pairing Spanish food and wines. Join wine expert Leslie Sbrocco of The Today Show and Chef Albert from Spain on a Fork for a virtual wine and cooking class. Visit wineregiontowatch.com/alegria for more information.

Representing 700 families of winegrowers and one-third of the vines of the region, GRANDES VINOS produces wines from grapes grown throughout the region’s 14 municipalities. 33% of the winery’s production is dedicated to Garnacha.

Founded in 1944, BODEGA SAN VALERO is the oldest winery in the Cariñena region and represents 500 growers. Over 70% of plantings are dedicated to indigenous grapes, including a wealth of old-vine Garnacha.

Alegría means joyful living in Spanish. Cariñena is one of the oldest wine regions in Spain, home to great Garnacha, Cariñena and more. Our wines are a fruity and delicious way to taste Spain. 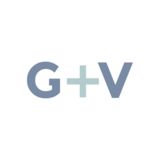