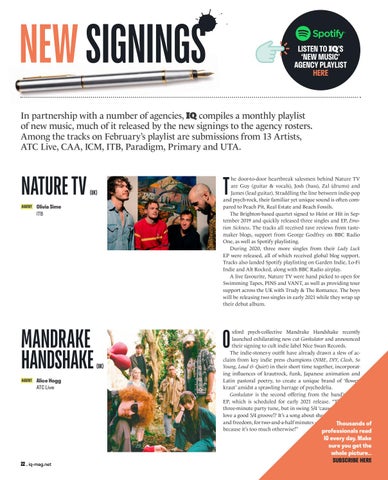 In partnership with a number of agencies, compiles a monthly playlist of new music, much of it released by the new signings to the agency rosters. Among the tracks on February’s playlist are submissions from 13 Artists, ATC Live, CAA, ICM, ITB, Paradigm, Primary and UTA.

he door-to-door heartbreak salesmen behind Nature TV are Guy (guitar & vocals), Josh (bass), Zal (drums) and James (lead guitar). Straddling the line between indie-pop and psych-rock, their familiar yet unique sound is often compared to Peach Pit, Real Estate and Beach Fossils. The Brighton-based quartet signed to Heist or Hit in September 2019 and quickly released three singles and EP, Emotion Sickness. The tracks all received rave reviews from tastemaker blogs, support from George Godfrey on BBC Radio One, as well as Spotify playlisting. During 2020, three more singles from their Lady Luck EP were released, all of which received global blog support. Tracks also landed Spotify playlisting on Garden Indie, Lo-Fi Indie and Alt Rocked, along with BBC Radio airplay. A live favourite, Nature TV were hand picked to open for Swimming Tapes, PINS and VANT, as well as providing tour support across the UK with Trudy & The Romance. The boys will be releasing two singles in early 2021 while they wrap up their debut album.

xford psych-collective Mandrake Handshake recently launched exhilarating new cut Gonkulator and announced their signing to cult indie label Nice Swan Records. The indie-stoner-y outfit have already drawn a slew of acclaim from key indie press champions (NME, DIY, Clash, So Young, Loud & Quiet) in their short time together, incorporating influences of krautrock, funk, Japanese animation and Latin pastoral poetry, to create a unique brand of ‘flowerkraut’ amidst a sprawling barrage of psychedelia. Gonkulator is the second offering from the band’s debut EP, which is scheduled for early 2021 release. “This is our three-minute party tune, but in swing 5/4 ‘cause who doesn’t love a good 5/4 groove!? It’s a song about sheer joy, happiness and freedom, for two-and-a-half minutes – can’t be any longer of Thousands because it’s too much otherwise!” professionals read

IQ every day. Make sure you get the whole picture… SUBSCRIBE HERE