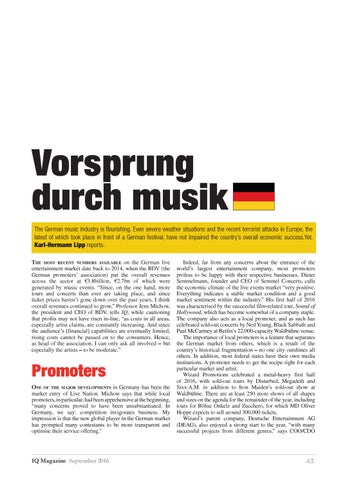 Vorsprung durch musik The German music industry is flourishing. Even severe weather situations and the recent terrorist attacks in Europe, the latest of which took place in front of a German festival, have not impaired the country’s overall economic success.Yet. Karl-Hermann Lipp reports. The most recent numbers available on the German live entertainment market date back to 2014, when the BDV (the German promoters’ association) put the overall revenues across the sector at €3.8billion, €2.7bn of which were generated by music events. “Since, on the one hand, more tours and concerts than ever are taking place, and since ticket prices haven’t gone down over the past years, I think overall revenues continued to grow,” Professor Jens Michow, the president and CEO of BDV, tells IQ, while cautioning that profits may not have risen in-line, “as costs in all areas, especially artist claims, are constantly increasing. And since the audience’s [financial] capabilities are eventually limited, rising costs cannot be passed on to the consumers. Hence, as head of the association, I can only ask all involved – but especially the artists – to be moderate.”

Promoters One of the major developments in Germany has been the market entry of Live Nation. Michow says that while local promoters, in particular, had been apprehensive at the beginning, “many concerns proved to have been unsubstantiated. In Germany, we say: competition invigorates business. My impression is that the new global player in the German market has prompted many contestants to be more transparent and optimise their service offering.”

Indeed, far from any concerns about the entrance of the world’s largest entertainment company, most promoters profess to be happy with their respective businesses. Dieter Semmelmann, founder and CEO of Semmel Concerts, calls the economic climate of the live events market “very positive. Everything indicates a stable market condition and a good market sentiment within the industry.” His first half of 2016 was characterised by the successful film-related tour, Sound of Hollywood, which has become somewhat of a company staple. The company also acts as a local promoter, and as such has celebrated sold-out concerts by Neil Young, Black Sabbath and Paul McCartney at Berlin’s 22,000-capacity Waldbühne venue. The importance of local promoters is a feature that separates the German market from others, which is a result of the country’s historical fragmentation – no one city outshines all others. In addition, most federal states have their own media institutions. A promoter needs to get the recipe right for each particular market and artist. Wizard Promotions celebrated a metal-heavy first half of 2016, with sold-out tours by Disturbed, Megadeth and Sixx:A.M. in addition to Iron Maiden’s sold-out show at Waldbühne. There are at least 250 more shows of all shapes and sizes on the agenda for the remainder of the year, including tours for Böhse Onkelz and Zucchero, for which MD Oliver Hoppe expects to sell around 300,000 tickets. Wizard’s parent company, Deutsche Entertainment AG (DEAG), also enjoyed a strong start to the year, “with many successful projects from different genres,” says COO/CDO