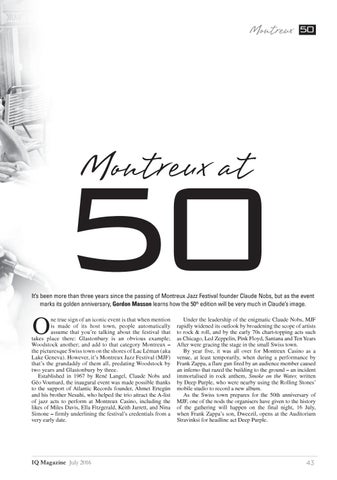 It’s been more than three years since the passing of Montreux Jazz Festival founder Claude Nobs, but as the event marks its golden anniversary, Gordon Masson learns how the 50th edition will be very much in Claude’s image.

ne true sign of an iconic event is that when mention is made of its host town, people automatically assume that you’re talking about the festival that takes place there: Glastonbury is an obvious example; Woodstock another; and add to that category Montreux – the picturesque Swiss town on the shores of Lac Léman (aka Lake Geneva). However, it’s Montreux Jazz Festival (MJF) that’s the grandaddy of them all, predating Woodstock by two years and Glastonbury by three. Established in 1967 by René Langel, Claude Nobs and Géo Voumard, the inaugural event was made possible thanks to the support of Atlantic Records founder, Ahmet Ertegün and his brother Nesuhi, who helped the trio attract the A-list of jazz acts to perform at Montreux Casino, including the likes of Miles Davis, Ella Fitzgerald, Keith Jarrett, and Nina Simone – firmly underlining the festival’s credentials from a very early date.

Under the leadership of the enigmatic Claude Nobs, MJF rapidly widened its outlook by broadening the scope of artists to rock & roll, and by the early 70s chart-topping acts such as Chicago, Led Zeppelin, Pink Floyd, Santana and Ten Years After were gracing the stage in the small Swiss town. By year five, it was all over for Montreux Casino as a venue, at least temporarily, when during a performance by Frank Zappa, a flare gun fired by an audience member caused an inferno that razed the building to the ground – an incident immortalised in rock anthem, Smoke on the Water, written by Deep Purple, who were nearby using the Rolling Stones’ mobile studio to record a new album. As the Swiss town prepares for the 50th anniversary of MJF, one of the nods the organisers have given to the history of the gathering will happen on the final night, 16 July, when Frank Zappa’s son, Dweezil, opens at the Auditorium Stravinksi for headline act Deep Purple.