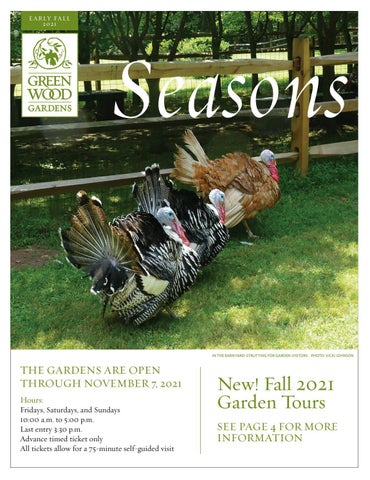 REVITALIZING GREENWOOD’S GARDENS While carrying out Greenwood’s recent renovation of the Main Axis and additions to the site including the North Ridge parking lot and rain garden, we also focused on revitalizing several key landscape areas. We turned to Bill Noble, a widely recognized garden designer and preservation professional previously deployed by the Garden Conservancy between 2002 and 2012 to assist Peter and Sofia Blanchard as they set out to develop Greenwood into a public garden. Informed by archival photos and the input of our Staff and Horticulture Committee, Bill created designs for four areas: the Forecourt, Main Lawn, Teahouse, and Summerhouse. In an interview with Seasons, Bill shared his objectives - first over-all and then for specific areas of the garden: “By creating different views and adding new combinations of plants, I hoped to enable visitors to experience a series of emotions arising from their journey through each area, ultimately connecting them by a common thread to the place that is Greenwood Gardens.”

“Directing the attention of visitors toward the 1950s house with a cohesive design that took inspiration from the 1920s Day era was the approach pursued in the Forecourt. By taking down the oval’s two large holly trees in decline that obscured the view and substituting flowing grasses, heath, rhododendrons, and dogwoods, we were able to create a clear view to the house, nicely framed by the front beds’ two stately elm trees.”

The Main Lawn “The goal on the Main Lawn was to achieve a garden structure that could be ‘read’ all year round through the addition of ample spring, summer, and fall color. Working with the bones of the previous restoration, we replaced ailing boxwood with ilex and evergreen geraniums, and amsonia blue ice with peony. There was also an opportunity to warm up the bed alongside the southern side of the house with the addition of the silvery tones of perennials and white and coral-pink roses.” PHOTO: VICKI JOHNSON

The Teahouse “The slope and the north and south borders around this iconic 1920s structure offered opportunities to reveal viable plants that over time, had been overcome by more aggressive plants. By looking back at the Day and Blanchard eras for inspiration, we endeavored to make dramatic use of foliage and color to create a theatrical space. We opted to refurbish with rhododendrons, a signature Greenwood plant, and, also add some interest-

ing, newer hybrids. The resulting plan was a Zenlike design of shrubs and trees that speak to one another through their shapes, massing, and foliage tones.”

The Summerhouse “Creating a cooling, calm passageway to and from the Summerhouse was the aim of our design approach for this TEAHOUSE IN SPRING PHOTO: NATE ADAMSON

intriguing area. The challenges posed by the varying sun and soil moisture conditions were complicated by the extensive roots of the horse chestnuts. In response, I took my cue from the plants that were already thriving there, such as the lung wort, and decided to enhance them with a diverse range of epimediums and ferns which, happily, have thrived in this shady environment.”

For 25 years, Bill has made a name for himself as a garden designer and garden preservation professional. As Director of Preservation for the Garden Conservancy, he was instrumental in the preservation and restoration of dozens of gardens throughout the U.S., including Greenwood Gardens. His latest book, Spirit of Place: The Making of a New England Garden, chronicles the pleasures and challenges of creating a garden at his home in Norwich, Vermont - a garden that feels deeply rooted to its place.

Journaling Workshop Friday, September 10 With Peter P. Blanchard III, Co-Founder and Chairman of the Board

Autumnal Natural History Ramble in the Gardens Friday, October 22 With Peter P. Blanchard III, Co-Founder and Chairman of the Board

Greenwood Gardens is endorsed by the Garden Conservancy, a national, nonprofit organization founded to help preserve America’s most exceptional gardens.

Funding for the restoration of Greenwood Gardens has been made possible in part by the Garden State Historic Preservation Trust.

The Genius of Bees - The Queen and Her City Wednesday, October 27 With Joe Lilenho, Beekeeper, Hilltop Honey A Walk Through Greenwood’s Past Friday, October 29 With Staff and Volunteers Walking and Talking Greenwood’s Trees and Winter ID Friday, November 5 With Scott Lamm, Arborist, Sav-A-Tree VISIT GREENWOODGARDENS.ORG FOR MORE INFORMATION AND TO REGISTER ONLINE. 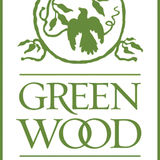