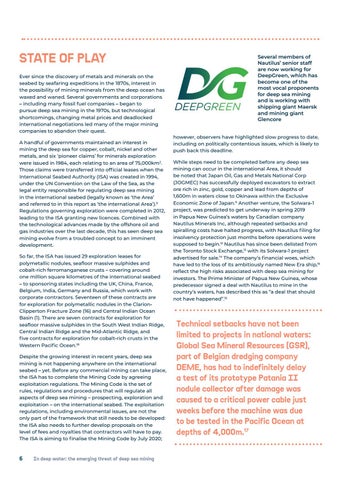 STATE OF PLAY Ever since the discovery of metals and minerals on the seabed by seafaring expeditions in the 1870s, interest in the possibility of mining minerals from the deep ocean has waxed and waned. Several governments and corporations – including many fossil fuel companies – began to pursue deep sea mining in the 1970s, but technological shortcomings, changing metal prices and deadlocked international negotiations led many of the major mining companies to abandon their quest. A handful of governments maintained an interest in mining the deep sea for copper, cobalt, nickel and other metals, and six ‘pioneer claims’ for minerals exploration were issued in 1984, each relating to an area of 75,000km2. Those claims were transferred into official leases when the International Seabed Authority (ISA) was created in 1994, under the UN Convention on the Law of the Sea, as the legal entity responsible for regulating deep sea mining in the international seabed (legally known as ‘the Area’ and referred to in this report as ‘the international Area’).9 Regulations governing exploration were completed in 2012, leading to the ISA granting new licences. Combined with the technological advances made by the offshore oil and gas industries over the last decade, this has seen deep sea mining evolve from a troubled concept to an imminent development. So far, the ISA has issued 29 exploration leases for polymetallic nodules, seafloor massive sulphides and cobalt-rich ferromanganese crusts – covering around one million square kilometres of the international seabed – to sponsoring states including the UK, China, France, Belgium, India, Germany and Russia, which work with corporate contractors. Seventeen of these contracts are for exploration for polymetallic nodules in the ClarionClipperton Fracture Zone (16) and Central Indian Ocean Basin (1). There are seven contracts for exploration for seafloor massive sulphides in the South West Indian Ridge, Central Indian Ridge and the Mid-Atlantic Ridge, and five contracts for exploration for cobalt-rich crusts in the Western Pacific Ocean.10 Despite the growing interest in recent years, deep sea mining is not happening anywhere on the international seabed – yet. Before any commercial mining can take place, the ISA has to complete the Mining Code by agreeing exploitation regulations. The Mining Code is the set of rules, regulations and procedures that will regulate all aspects of deep sea mining – prospecting, exploration and exploitation – on the international seabed. The exploitation regulations, including environmental issues, are not the only part of the framework that still needs to be developed: the ISA also needs to further develop proposals on the level of fees and royalties that contractors will have to pay. The ISA is aiming to finalise the Mining Code by July 2020;

6    In deep water: the emerging threat of deep sea mining

Several members of Nautilus’ senior staff are now working for DeepGreen, which has become one of the most vocal proponents for deep sea mining and is working with shipping giant Maersk and mining giant Glencore however, observers have highlighted slow progress to date, including on politically contentious issues, which is likely to push back this deadline. While steps need to be completed before any deep sea mining can occur in the international Area, it should be noted that Japan Oil, Gas and Metals National Corp (JOGMEC) has successfully deployed excavators to extract ore rich in zinc, gold, copper and lead from depths of 1,600m in waters close to Okinawa within the Exclusive Economic Zone of Japan.11 Another venture, the Solwara-1 project, was predicted to get underway in spring 2019 in Papua New Guinea’s waters by Canadian company Nautilus Minerals Inc, although repeated setbacks and spiralling costs have halted progress, with Nautilus filing for insolvency protection just months before operations were supposed to begin.12 Nautilus has since been delisted from the Toronto Stock Exchange,13 with its Solwara-1 project advertised for sale.14 The company’s financial woes, which have led to the loss of its ambitiously named New Era ship,15 reflect the high risks associated with deep sea mining for investors. The Prime Minister of Papua New Guinea, whose predecessor signed a deal with Nautilus to mine in the country’s waters, has described this as “a deal that should not have happened”.16

Technical setbacks have not been limited to projects in national waters: Global Sea Mineral Resources (GSR), part of Belgian dredging company DEME, has had to indefinitely delay a test of its prototype Patania II nodule collector after damage was caused to a critical power cable just weeks before the machine was due to be tested in the Pacific Ocean at depths of 4,000m.17 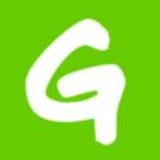 The oceans are facing more threats now than at any time in history. Yet a nascent industry is ramping up to exert yet more pressure on marin...

The oceans are facing more threats now than at any time in history. Yet a nascent industry is ramping up to exert yet more pressure on marin...