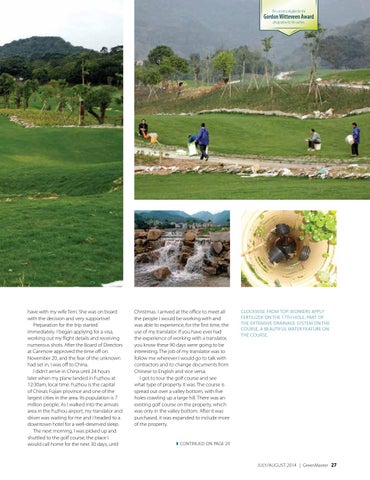 This article is eligible for the

have with my wife Terri. She was on board with the decision and very supportive! Preparation for the trip started immediately. I began applying for a visa, working out my flight details and receiving numerous shots. After the Board of Directors at Canmore approved the time off on November 20, and the fear of the unknown had set in, I was off to China. I didn’t arrive in China until 24 hours later when my plane landed in Fuzhou at 12:30am, local time. Fuzhou is the capital of China’s Fujian province and one of the largest cities in the area. Its population is 7 million people. As I walked into the arrivals area in the Fuzhou airport, my translator and driver was waiting for me and I headed to a downtown hotel for a well-deserved sleep. The next morning, I was picked up and shuttled to the golf course, the place I would call home for the next 30 days, until

Christmas. I arrived at the office to meet all the people I would be working with and was able to experience, for the first time, the use of my translator. If you have ever had the experience of working with a translator, you know these 90 days were going to be interesting. The job of my translator was to follow me wherever I would go to talk with contractors and to change documents from Chinese to English and vice versa. I got to tour the golf course and see what type of property it was. The course is spread out over a valley bottom, with five holes crawling up a large hill. There was an existing golf course on the property, which was only in the valley bottom. After it was purchased, it was expanded to include more of the property.

CLOCKWISE FROM TOP: WORKERS APPLY FERTILIZER ON THE 17TH HOLE, PART OF THE EXTENSIVE DRAINAGE SYSTEM ON THE COURSE, A BEAUTIFUL WATER FEATURE ON THE COURSE.