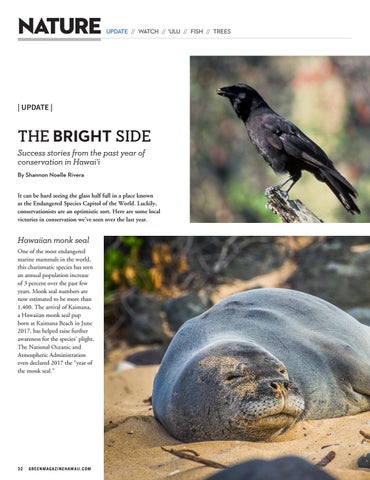 THE BRIGHT SIDE Success stories from the past year of conservation in Hawai‘i By Shannon Noelle Rivera It can be hard seeing the glass half full in a place known as the Endangered Species Capitol of the World. Luckily, conservationists are an optimistic sort. Here are some local victories in conservation we’ve seen over the last year.

Hawaiian monk seal One of the most endangered marine mammals in the world, this charismatic species has seen an annual population increase of 3 percent over the past few years. Monk seal numbers are now estimated to be more than 1,400. The arrival of Kaimana, a Hawaiian monk seal pup born at Kaimana Beach in June 2017, has helped raise further awareness for the species’ plight. The National Oceanic and Atmospheric Administration even declared 2017 the “year of the monk seal.”