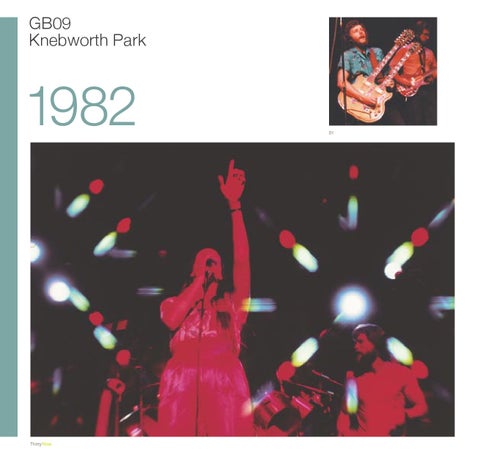 Greenbelt moved for only the second time in its life, this time to a location already hosting large-attendance outdoor gigs like the Capital Radio Jazz festival. With room for a bigger and better mainstage, Knebworth Park allowed room for Greenbelters to breathe.

And the festival would need that extra space, too, as Chicago’s Resurrection Band (Rez Band) rocked mainstage and Radio One broadcast another live roadshow in front of the crowds. There was also a welcome return from Jim Palosaari of Lonesome Stone with his new act Servant – complete with their amazing stage show and special effects. Noel Paul Stookey (of iconic folk trio Peter, Paul and Mary) also performed, as did Rolling Stone favourite Andy Pratt. Greenbelt 1982 also witnessed the Big Top debut of Scottish band Talking Drums. Making waves north of the border, Talking Drums would become firm festival favourites in the early 80s and then provide a future Festival Chair. There was soul-funk from Paradise and gospel from Maxine and the Majestics and renowned keyboard player Jeff Hammer was also there. But Charlene, of I’ve never been to me fame, had to withdraw at the last minute due to ill health. The ninth Greenbelt saw a lot of firsts – firsts that were to become part of our staple festival diet in years to come.

The Oddball Special was the first of Greenbelt’s late night magazine review shows and there was something in the programme for teenagers called The Rolling Mag! The film programme was entitled ‘Politics at the Movies’, a slogan competition was launched for Greenbelt 1983, the tenth festival, and a video called The Greenbelt Demos was shot. 1982 saw Graham Cray handing over his chair position to John Gooding and among the speakers were Roger Forster and Canadian aesthetician Calvin Seerveld. Speaking in depth on a ‘Theology of the Arts’, Calvin later wrote Rainbows for the Fallen World: Aesthetic Life and Artistic Task for the Greenbelt Files, published in 1988. And among the notable speakers that year was Jim Wallis of the Washington Sojourners Community. He loved his first visit to Greenbelt but, at an after-festival party, he suggested that Greenbelt seemed to him almost like two events in one: “a ‘Jesus festival’ and a ‘social justice festival’.” Jim’s perspective was poignant. But Greenbelt already knew that a Jesus festival had to be a social justice festival. There was no distinction. Meanwhile, in The Roxy seminar venue, Patrick Sookhdeo was speaking about ‘The Challenge of Islam to the Christian Faith.’ Any way you read it, 1982 was a prophetic year.

Silliness Stewart Henderson recalls hosting the first Oddball Special with Pete ‘Willie’ Williams: “It was Vic and Bob before Vic and Bob. It was postmodern before postmodernism became the sign of our times. James Holloway and his troupe did some Pinter. A pianist called Mac Frampton played Flight of the Bumblebee in a Vegas-style (in ruffled shirt and velvet suit), finishing with: “Let’s hear it for Johan Sebastian Bach.” A young Milton Jones did a song with his band Norman. And then Louis Alfredo, a Spanish performance artist, climbed in and out of a black plastic bag for minutes on end. It was wonderfully Greenbelt.” Freedom Helen Walters remembers her first Greenbelt at Knebworth in 1982. “I was 15 and it was an amazing feeling to be so free. Our youth leaders were confident enough in the safety of the environment to let us do just what we wanted – even if that was getting up onto the mainstage at 6am to watch the sunrise. I hope my children can enjoy that freedom when they are 15, too.”

Main photo: Jim Palosaari’s Servant play mainstage to great effect 01: Rez Band prove that two heads are better than one 02: Maxine and the Majestics ‘do it for themselves’ 03: The soulful Paradise with flat cap (whippet not pictured)

The book Greenbelt published in 2003 to mark its 30th birthday.