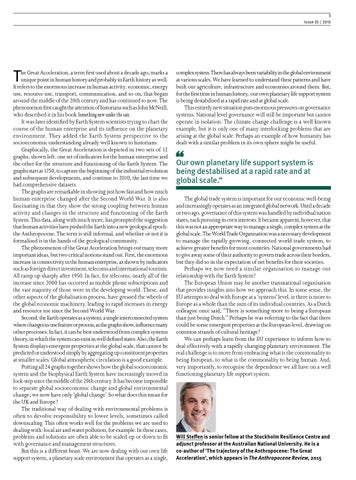 he Great Acceleration, a term first used about a decade ago, marks a unique point in human history and probably in Earth history as well. It refers to the enormous increase in human activity: economic, energy use, resource use, transport, communication, and so on, that began around the middle of the 20th century and has continued to now. The phenomenon first caught the attention of historians such as John McNeill, who described it in his book Something new under the sun. It was later identified by Earth System scientists trying to chart the course of the human enterprise and its influence on the planetary environment. They added the Earth System perspective to the socioeconomic understanding already well known to historians. Graphically, the Great Acceleration is depicted in two sets of 12 graphs, shown left: one set of indicators for the human enterprise and the other for the structure and functioning of the Earth System. The graphs start at 1750, to capture the beginning of the industrial revolution and subsequent developments, and continue to 2010, the last time we had comprehensive datasets. The graphs are remarkable in showing just how fast and how much human enterprise changed after the Second World War. It is also fascinating in that they show the strong coupling between human activity and changes in the structure and functioning of the Earth System. This data, along with much more, has prompted the suggestion that human activities have pushed the Earth into a new geological epoch: the Anthropocene. The term is still informal, and whether or not it is formalised is in the hands of the geological community. The phenomenon of the Great Acceleration brings out many more important ideas, but two critical notions stand out. First, the enormous increase in connectivity in the human enterprise, as shown by indicators such as foreign direct investment, telecoms and international tourism. All ramp up sharply after 1950. In fact, for telecoms, nearly all of the increase since 2000 has occurred as mobile phone subscriptions and the vast majority of those were in the developing world. These, and other aspects of the globalisation process, have greased the wheels of the global economic machinery, leading to rapid increases in energy and resource use since the Second World War. Second, the Earth operates as a system, a single interconnected system where changes in one feature or process, as the graphs show, influence many other processes. In fact, it can be best understood from complex systems theory, in which the system can exist in well defined states. Also, the Earth System displays emergent properties at the global scale, that cannot be predicted or understood simply by aggregating up constituent properties at smaller scales. Global atmospheric circulation is a good example. Putting all 24 graphs together shows how the global socioeconomic system and the biophysical Earth System have increasingly moved in lock-step since the middle of the 20th century. It has become impossible to separate global socioeconomic change and global environmental change; we now have only ‘global change’. So what does this mean for the UK and Europe? The traditional way of dealing with environmental problems is often to devolve responsibility to lower levels, sometimes called downscaling. This often works well for the problems we are used to dealing with: local air and water pollution, for example. In these cases, problems and solutions are often able to be scaled up or down to fit with governance and management structures. But this is a different beast. We are now dealing with our own life support system, a planetary scale environment that operates as a single,

complex system. There has always been variability in the global environment at various scales. We have learned to understand these patterns and have built our agriculture, infrastructure and economies around them. But, for the first time in human history, our own planetary life support system is being destabilised at a rapid rate and at global scale. This entirely new situation puts enormous pressures on governance systems. National level governance will still be important but cannot operate in isolation. The climate change challenge is a well known example, but it is only one of many interlocking problems that are arising at the global scale. Perhaps an example of how humanity has dealt with a similar problem in its own sphere might be useful.

Our own planetary life support system is being destabilised at a rapid rate and at global scale.” The global trade system is important for our economic well-being and increasingly operates as an integrated global network. Until a decade or two ago, governance of this system was handled by individual nation states, each pursuing its own interests. It became apparent, however, that this was not an appropriate way to manage a single, complex system at the global scale. The World Trade Organisation was a necessary development to manage the rapidly growing, connected world trade system, to achieve greater benefits for most countries. National governments had to give away some of their authority to govern trade across their borders, but they did so in the expectation of net benefits for their societies. Perhaps we now need a similar organisation to manage our relationship with the Earth System? The European Union may be another transnational organisation that provides insights into how we approach this. In some sense, the EU attempts to deal with Europe at a ‘systems’ level, ie there is more to Europe as a whole than the sum of its individual countries. As a Dutch colleague once said, “There is something more to being a European than just being Dutch.” Perhaps he was referring to the fact that there could be some emergent properties at the European level, drawing on common strands of cultural heritage? We can perhaps learn from the EU experience to inform how to deal effectively with a rapidly changing planetary environment. The real challenge is to move from embracing what is the commonality to being European, to what is the commonality to being human. And, very importantly, to recognise the dependence we all have on a well functioning planetary life support system.

Will Steffen is senior fellow at the Stockholm Resilience Centre and adjunct professor at the Australian National University. He is a co-author of ‘The trajectory of the Anthropocene: The Great Acceleration’, which appears in The Anthropocene Review, 2015

In this edition we look at the phenomenon known as the Great Acceleration - the massive increase in human impacts on the planet since the 1950s - and what it means for the UK. 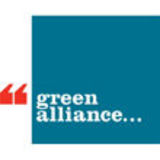