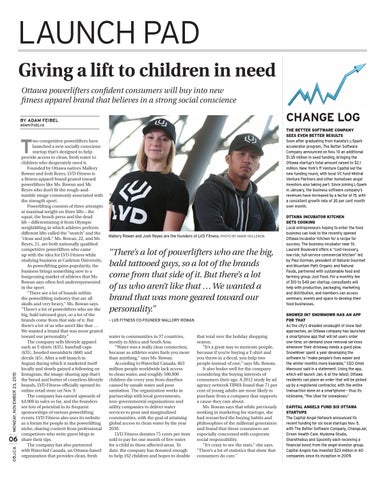 THE BETTER SOFTWARE COMPANY SEES EVEN BETTER RESULTS Soon after graduating from Kanata’s L-Spark accelerator program, The Better Software Company announced on Nov. 10 an additional $1.35 million in seed funding, bringing the Ottawa startup’s total amount raised to $2.1 million. New York’s ff Venture Capital led the new funding round, with local VC fund Mistral Venture Partners and other hometown angel investors also taking part. Since joining L-Spark in January, the business software company’s revenues have increased by a factor of 15, with a consistent growth rate of 35 per cent month over month.

wo competitive powerlifters have launched a new socially conscious startup that’s designed to help provide access to clean, fresh water to children who desperately need it. Founded by Ottawa natives Mallory Rowan and Josh Reyes, LVD Fitness is a fitness apparel brand geared toward powerlifters like Ms. Rowan and Mr. Reyes who don’t fit the rough-andtumble image commonly associated with the strength sport. Powerlifting consists of three attempts at maximal weight on three lifts – the squat, the bench press and the dead lift – differentiating it from Olympic weightlifting in which athletes perform different lifts called the “snatch” and the “clean and jerk.” Ms. Rowan, 22, and Mr. Reyes, 21, are both nationally qualified competitive powerlifters who came up with the idea for LVD Fitness while studying business at Carleton University. As powerlifting gains popularity, the business brings something new to a burgeoning market of athletes that Ms. Rowan says often feel underrepresented in the sport. “There are a lot of brands within the powerlifting industry that are all skulls and very heavy,” Ms. Rowan says. “There’s a lot of powerlifters who are the big, bald tattooed guys, so a lot of the brands come from that side of it. But there’s a lot of us who aren’t like that … We wanted a brand that was more geared toward our personality.” The company sells lifestyle apparel such as T-shirts ($35), baseball caps ($35), hooded sweatshirts ($60) and decals ($5). After a soft launch in August during which it marketed itself locally and slowly gained a following on Instagram, the image-sharing app that’s the bread and butter of countless lifestyle brands, LVD Fitness officially opened its online retail store on Nov. 9. The company has earned upwards of $4,000 in sales so far, and the founders see lots of potential in its frequent sponsorships of various powerlifting events. LVD Fitness also uses its website as a forum for people in the powerlifting niche, sharing content from professional competitors who write guest blogs to share their tips. The company has also partnered with WaterAid Canada, an Ottawa-based organization that provides clean, fresh

Mallory Rowan and Josh Reyes are the founders of LVD Fitness. PHOTO BY MARK HOLLERON

“There’s a lot of powerlifters who are the big, bald tattooed guys, so a lot of the brands come from that side of it. But there’s a lot of us who aren’t like that … We wanted a brand that was more geared toward our personality.” – LVD FITNESS CO-FOUNDER MALLORY ROWAN

water to communities in 37 countries, mostly in Africa and South Asia. “Water was a really clear connection, because as athletes water fuels you more than anything,” says Ms. Rowan. According to WaterAid Canada, 663 million people worldwide lack access to clean water, and roughly 500,000 children die every year from diarrhea caused by unsafe water and poor sanitation. The organization works in partnership with local governments, non-governmental organizations and utility companies to deliver water services to poor and marginalized communities, with the goal of attaining global access to clean water by the year 2030. LVD Fitness donates 75 cents per item sold to pay for one month of free water for a child in those affected areas. To date, the company has donated enough to help 162 children and hopes to double

that total over the holiday shopping season. “It’s a great way to motivate people, because if you’re buying a T-shirt and you throw in a decal, you help two people instead of one,” says Ms. Rowan. It also bodes well for the company considering the buying interests of consumers their age. A 2012 study by ad agency network TBWA found that 71 per cent of young adults are more likely to purchase from a company that supports a cause they care about. Ms. Rowan says that while previously working in marketing for startups, she had researched the buying habits and philosophies of the millenial generation and found that those consumers are especially concerned with corporate social responsibility. “It’s crazy to see the stats,” she says. “There’s a lot of statistics that show that consumers do care.”

OTTAWA INCUBATOR KITCHEN GETS COOKING Local entrepreneurs hoping to enter the food business can look to the recently opened Ottawa Incubator Kitchen for a recipe for success. The business incubator near St. Laurent Boulevard offers a “cost-recovery, low-risk, full-service commercial kitchen” led by Paul Gorman, president of Natural Gourmet and Mountain Path Organic and Natural Foods, partnered with sustainable food and farming group Just Food. For a monthly fee of $10 to $40 per startup, consultants will help with production, packaging, marketing and distribution, and members can access seminars, events and space to develop their food businesses. SNOWED IN? SNOWMOWR HAS AN APP FOR THAT As the city’s dreaded onslaught of snow fast approaches, an Ottawa company has launched a smartphone app that will let users order one-time, on-demand snow removal services whenever their driveway needs a good plow. SnowMowr spent a year developing the software to “make people’s lives easier and the winter months more bearable,” CEO Omid Manoussi said in a statement. Using the app, which will launch Jan. 6 at the latest, Ottawa residents can place an order that will be picked up by a registered contractor, with the entire transaction done on a smartphone – thus its nickname, “the Uber for snowplows.” CAPITAL ANGELS FUND SIX OTTAWA STARTUPS The Capital Angel Network announced its recent funding for six local startups Nov. 5, with The Better Software Company, ChangeJar, Eirsen Health Care, Mydoma Studio, Sharethebus and Spoonity each receiving a financial boost from the angel investor group. Capital Angels has invested $23 million in 40 companies since its inception in 2009.