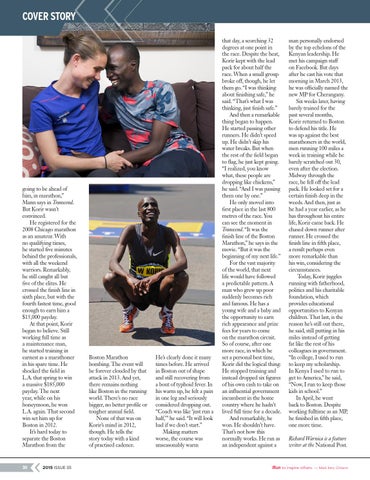 going to be ahead of him, in marathon,” Mann says in Transcend. But Korir wasn’t convinced. He registered for the 2008 Chicago marathon as an amateur. With no qualifying times, he started five minutes behind the professionals, with all the weekend warriors. Remarkably, he still caught all but five of the elites. He crossed the finish line in sixth place, but with the fourth fastest time, good enough to earn him a $15,000 payday. At that point, Korir began to believe. Still working full time as a maintenance man, he started training in earnest as a marathoner in his spare time. He shocked the field in L.A. that spring to win a massive $185,000 payday. The next year, while on his honeymoon, he won L.A. again. That second win set him up for Boston in 2012. It’s hard today to separate the Boston Marathon from the

Boston Marathon bombing. The event will be forever clouded by that attack in 2013. And yet, there remains nothing like Boston in the running world. There’s no race bigger, no better profile or tougher annual field. None of that was on Korir’s mind in 2012, though. He tells the story today with a kind of practised cadence.

He’s clearly done it many times before. He arrived in Boston out of shape and still recovering from a bout of typhoid fever. In his warm up, he felt a pain in one leg and seriously considered dropping out. “Coach was like ‘just run a half,’” he said. “It will look bad if we don’t start.” Making matters worse, the course was unseasonably warm

that day, a scorching 32 degrees at one point in the race. Despite the heat, Korir kept with the lead pack for about half the race. When a small group broke off, though, he let them go. “I was thinking about finishing safe,” he said. “That’s what I was thinking, just finish safe.” And then a remarkable thing began to happen. He started passing other runners. He didn’t speed up. He didn’t skip his water breaks. But when the rest of the field began to flag, he just kept going. “I realized, you know what, these people are dropping like chickens,” he said. “And I was passing them one by one.” He only moved into first place in the last 800 metres of the race. You can see the moment in Transcend. “It was the finish line of the Boston Marathon,” he says in the movie. “But it was the beginning of my next life.” For the vast majority of the world, that next life would have followed a predictable pattern. A man who grew up poor suddenly becomes rich and famous. He has a young wife and a baby and the opportunity to earn rich appearance and prize fees for years to come on the marathon circuit. So of course, after one more race, in which he set a personal best time, Korir did the logical thing: He stopped training and instead dropped six figures of his own cash to take on an influential government incumbent in the home country where he hadn’t lived full time for a decade. And remarkably, he won. He shouldn’t have. That’s not how this normally works. He ran as an independent against a

man personally endorsed by the top echelons of the Kenyan leadership. He met his campaign staff on Facebook. But days after he cast his vote that morning in March 2013, he was officially named the new MP for Cherangany. Six weeks later, having barely trained for the past several months, Korir returned to Boston to defend his title. He was up against the best marathoners in the world, men running 100 miles a week in training while he barely scratched out 30, even after the election. Midway through the race, he fell off the lead pack. He looked set for a certain finish deep in the weeds. And then, just as he had a year earlier, as he has throughout his entire life, Korir came back. He chased down runner after runner. He crossed the finish line in fifth place, a result perhaps even more remarkable than his win, considering the circumstances. Today, Korir juggles running with fatherhood, politics and his charitable foundation, which provides educational opportunities to Kenyan children. That last, is the reason he’s still out there, he said, still putting in his miles instead of getting fat like the rest of his colleagues in government. “In college, I used to run to keep my scholarship. In Kenya I used to run to get to America,” he said, “Now, I run to keep those kids in school.” In April, he went back to Boston. Despite working fulltime as an MP, he finished in fifth place, one more time. Richard Warnica is a feature writer at the National Post. 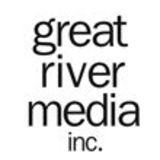