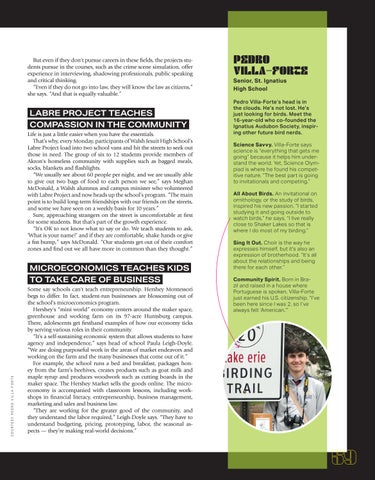 But even if they don&#39;t pursue careers in these fields, the projects students pursue in the courses, such as the crime scene simulation, offer experience in interviewing, shadowing professionals, public speaking and critical thinking. “Even if they do not go into law, they will know the law as citizens,” she says. “And that is equally valuable.”

LABRE PROJECT TEACHES COMPASSION IN THE COMMUNITY Life is just a little easier when you have the essentials. That’s why, every Monday, participants of Walsh Jesuit High School’s Labre Project load into two school vans and hit the streets to seek out those in need. The group of six to 12 students provide members of Akron&#39;s homeless community with supplies such as bagged meals, socks, blankets and flashlights. “We usually see about 60 people per night, and we are usually able to give out two bags of food to each person we see,” says Meghan McDonald, a Walsh alumnus and campus minister who volunteered with Labre Project and now heads up the school’s program. “The main point is to build long-term friendships with our friends on the streets, and some we have seen on a weekly basis for 10 years.” Sure, approaching strangers on the street is uncomfortable at first for some students. But that’s part of the growth experience. “It’s OK to not know what to say or do. We teach students to ask, ‘What is your name?’ and if they are comfortable, shake hands or give a fist bump,” says McDonald. “Our students get out of their comfort zones and find out we all have more in common than they thought.”

MICROECONOMICS TEACHES KIDS TO TAKE CARE OF BUSINESS Some say schools can&#39;t teach entrepreneurship. Hershey Montessori begs to differ. In fact, student-run businesses are blossoming out of the school’s microeconomics program. Hershey&#39;s “mini world” economy centers around the maker space, greenhouse and working farm on its 97-acre Huntsburg campus. There, adolescents get firsthand examples of how our economy ticks by serving various roles in their community. “It’s a self-sustaining economic system that allows students to have agency and independence,” says head of school Paula Leigh-Doyle. “We are doing purposeful work in the areas of market endeavors and working on the farm and the many businesses that come out of it.” For example, the school runs a bed and breakfast, packages honey from the farm’s beehives, creates products such as goat milk and maple syrup and produces woodwork such as cutting boards in the maker space. The Hershey Market sells the goods online. The microeconomy is accompanied with classroom lessons, including workshops in financial literacy, entrepreneurship, business management, marketing and sales and business law. “They are working for the greater good of the community, and they understand the labor required,” Leigh-Doyle says. “They have to understand budgeting, pricing, prototyping, labor, the seasonal aspects — they’re making real-world decisions.”

Pedro Villa-Forte’s head is in the clouds. He’s not lost. He’s just looking for birds. Meet the 16-year-old who co-founded the Ignatius Audubon Society, inspiring other future bird nerds. Science Savvy. Villa-Forte says science is “everything that gets me going” because it helps him understand the world. Yet, Science Olympiad is where he found his competitive nature. “The best part is going to invitationals and competing.” All About Birds. An invitational on ornithology, or the study of birds, inspired his new passion. “I started studying it and going outside to watch birds,” he says. “I live really close to Shaker Lakes so that is where I do most of my birding.” Sing It Out. Choir is the way he expresses himself, but it&#39;s also an expression of brotherhood. “It’s all about the relationships and being there for each other.” Community Spirit. Born in Brazil and raised in a house where Portuguese is spoken, Villa-Forte just earned his U.S. citizenship. “I’ve been here since I was 2, so I’ve always felt ‘American.’”