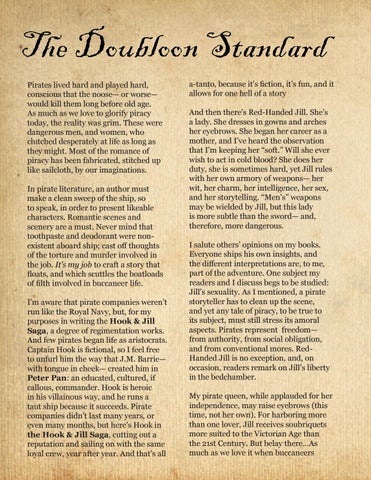 Pirates lived hard and played hard, conscious that the noose— or worse— would kill them long before old age. As much as we love to glorify piracy today, the reality was grim. These were dangerous men, and women, who clutched desperately at life as long as they might. Most of the romance of piracy has been fabricated, stitched up like sailcloth, by our imaginations. In pirate literature, an author must make a clean sweep of the ship, so to speak, in order to present likeable characters. Romantic scenes and scenery are a must. Never mind that toothpaste and deodorant were nonexistent aboard ship; cast off thoughts of the torture and murder involved in the job. It’s my job to craft a story that floats, and which scuttles the boatloads of filth involved in buccaneer life. I’m aware that pirate companies weren’t run like the Royal Navy, but, for my purposes in writing the Hook &amp; Jill Saga, a degree of regimentation works. And few pirates began life as aristocrats. Captain Hook is fictional, so I feel free to unfurl him the way that J.M. Barrie— with tongue in cheek— created him in Peter Pan: an educated, cultured, if callous, commander. Hook is heroic in his villainous way, and he runs a taut ship because it succeeds. Pirate companies didn’t last many years, or even many months, but here’s Hook in the Hook &amp; Jill Saga, cutting out a reputation and sailing on with the same loyal crew, year after year. And that’s all

a-tanto, because it’s fiction, it’s fun, and it allows for one hell of a story And then there’s Red-Handed Jill. She’s a lady. She dresses in gowns and arches her eyebrows. She began her career as a mother, and I’ve heard the observation that I’m keeping her “soft.” Will she ever wish to act in cold blood? She does her duty, she is sometimes hard, yet Jill rules with her own armory of weapons— her wit, her charm, her intelligence, her sex, and her storytelling. “Men’s” weapons may be wielded by Jill, but this lady is more subtle than the sword— and, therefore, more dangerous. I salute others’ opinions on my books. Everyone ships his own insights, and the different interpretations are, to me, part of the adventure. One subject my readers and I discuss begs to be studied: Jill’s sexuality. As I mentioned, a pirate storyteller has to clean up the scene, and yet any tale of piracy, to be true to its subject, must still stress its amoral aspects. Pirates represent freedom— from authority, from social obligation, and from conventional mores. RedHanded Jill is no exception, and, on occasion, readers remark on Jill’s liberty in the bedchamber. My pirate queen, while applauded for her independence, may raise eyebrows (this time, not her own). For harboring more than one lover, Jill receives soubriquets more suited to the Victorian Age than the 21st Century. But belay there…As much as we love it when buccaneers 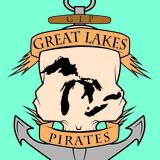