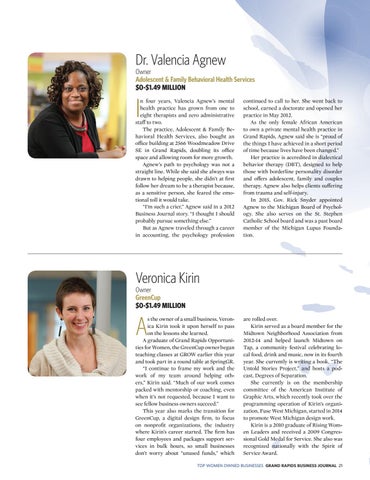 n four years, Valencia Agnew’s mental health practice has grown from one to eight therapists and zero administrative staff to two. The practice, Adolescent & Family Behavioral Health Services, also bought an office building at 2566 Woodmeadow Drive SE in Grand Rapids, doubling its office space and allowing room for more growth. Agnew’s path to psychology was not a straight line. While she said she always was drawn to helping people, she didn’t at first follow her dream to be a therapist because, as a sensitive person, she feared the emotional toll it would take. “I’m such a crier,” Agnew said in a 2012 Business Journal story. “I thought I should probably pursue something else.” But as Agnew traveled through a career in accounting, the psychology profession

continued to call to her. She went back to school, earned a doctorate and opened her practice in May 2012. As the only female African American to own a private mental health practice in Grand Rapids, Agnew said she is “proud of the things I have achieved in a short period of time because lives have been changed.” Her practice is accredited in dialectical behavior therapy (DBT), designed to help those with borderline personality disorder and offers adolescent, family and couples therapy. Agnew also helps clients suffering from trauma and self-injury. In 2015, Gov. Rick Snyder appointed Agnew to the Michigan Board of Psychology. She also serves on the St. Stephen Catholic School board and was a past board member of the Michigan Lupus Foundation.

s the owner of a small business, Veronica Kirin took it upon herself to pass on the lessons she learned. A graduate of Grand Rapids Opportunities for Women, the GreenCup owner began teaching classes at GROW earlier this year and took part in a round table at SpringGR. “I continue to frame my work and the work of my team around helping others,” Kirin said. “Much of our work comes packed with mentorship or coaching, even when it’s not requested, because I want to see fellow business owners succeed.” This year also marks the transition for GreenCup, a digital design firm, to focus on nonprofit organizations, the industry where Kirin’s career started. The firm has four employees and packages support services in bulk hours, so small businesses don’t worry about “unused funds,” which

are rolled over. Kirin served as a board member for the Midtown Neighborhood Association from 2012-14 and helped launch Midtown on Tap, a community festival celebrating local food, drink and music, now in its fourth year. She currently is writing a book, “The Untold Stories Project,” and hosts a podcast, Degrees of Separation. She currently is on the membership committee of the American Institute of Graphic Arts, which recently took over the programming operation of Kirin’s organization, Fuse West Michigan, started in 2014 to promote West Michigan design work. Kirin is a 2010 graduate of Rising Women Leaders and received a 2009 Congressional Gold Medal for Service. She also was recognized nationally with the Spirit of Service Award. 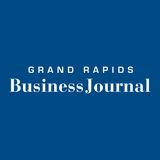