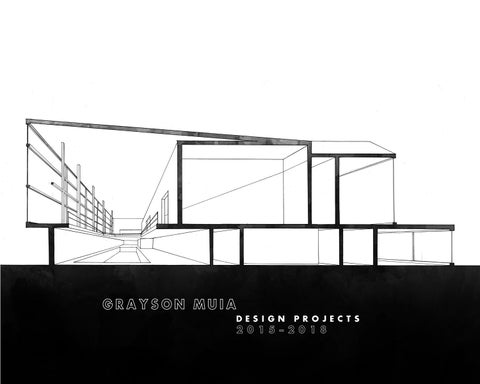 MASTER VISION FOR AKRON, OHIO The first design problem we were assigned to solve was to reenvision downtown Akron in way that would attract people to the city that is not currently. As a small group, our intent was to create a vibrant downtown that attracts people with talents and interests that could impact the community in a major way. The north-south spine of the redeveloped district will be a walkable, bike-able transit, that also provides opportunities to pause and gather. Public spaces at a variety of scales offer opportunities to share a meal, meet friends, shop or work. The Towpath is better defined and is protected from vehicle traffic using the new tunnel, to better support a healthy active lifestyle. This master vision reveals the cultural resources that Akron currently has and introduces new, complementary services.

The form-finding was an investigation of form with spatial, environmental, and site conditions in consideration. The initial forms were created (below), and then the conditions were probed through hand-sketching and diagramming. The three different types of form were created using different operative methods and materials for each.

1 DAYLIGHTING SELECTED FORM - The idea behind this form study was to investigate how to connect important areas around site. The convergingâ&#x20AC;&#x153;fingersâ&#x20AC;? (above) transformed from the building to the circulation of a building with spaces created around the circulation (right). This created a form sensitive to the site context, while still connecting the separate urban spaces.

2 DAYLIGHTING VIEWS The idea behind this form study was to investigate form created through structure and ribbon. The study investigated the ways of creating spaces on the site by changing the shape of structure and orientation of ribbons. The variation of the two elements created different conditions of daylighting, views, space within one building. This form study was carried in conjunction with the previous as a further investigation of facade.

3 VIEWS The original idea behind this form study was to investigate form created through a subtractive process. The form started as a box that took up the entire site. The investigation was to discover the effects of removing mass and how that could improve or worsen important conditions of space, daylighting, The white portions of the model are meant to read as parts of the form that views, or passive environmental response of the building. were not subtracted from.

The project objective given to the class was to create a building design that would align and adapt the master vision proposed previously. The instructor left the decision of the site and program of the building up to each individual designer. The only major requirement was that the building had to be around 60,000 square feet (sq. ft.). The main focus, once the site was proposed and approved, was to investigate a multitude of building forms. The building is a fermentation center that aims to expose people to the fermenting process used for beer as well as particular breads. The program will become a good addition to the many bars and restaurants on the other side of P. Williams St. It will also accommodate for the bikers and pedestrians who use the towpath by creating a entrance to an existing through-street tunnel.

A WP TO TH

LEVEL_03 The organization of program is done to explain the processes of making beer and bread clearly, while exposing occupants to steps in the process that have passed or new ones to come. The organization and floor-plate-shifts, also, allows dissimilar programs to be exposed to one another for potential unique interaction. The top level is the production of in-house beers and breads that supply the ground floor restaurant/bar through a large exposed service shaft. BAKERY/PACKAGING

The purpose of this conceptualization is to create a precedent of public space and building design for the identity of this new development in northern madrid. While the assignment was to design a building, the focus of this design is on how a mixed-used building could create a quality of public space within and around it. It is was a necessity to reflect on the elements that define quality public spaces, or plazas, throughout history in order to do so. Key elements were identified and reconceptualized in order to create a plaza contextualized to contemporary society. The large map of madrid (right) marks the existing prevalent market spaces in the city. With a lack of markets in the north of the city, the designed building is programmed for a large market place similar to the markets that the city is identified by. This market on the ground floor has the ability to spill into the created plaza and a large open-air market would be a result. The ground floor of the market, plaza, and urban context have a strong physical connection allowing users to move throughout the three separate spaces without feeling like they have ever entered a building. 13

COLLECT VOLUMES OF STORM RUNOFF AND RIVER WATER ONTO SITE.

DESIGN THE EDUCATIONAL AND PUBLIC PROGRAM FORMS AROUND A CONSTRUCTED WATER FEATURE.

FILTER THE COLLECTED WATER IN CONSTRUCTED WETLANDS TO BE REUSED BY THE BUILDING AND THE CITY.

The project objective given to the class was to create a civic center that aimed to add meaning and attraction to an overlooked site along the Cuyahoga River in Cleveland, Ohio. The river has a history with poor water quality, since the surrounding river banks in the city were mostly industrial areas. The city has lost use for much of the existing industrial zones ( in RED above) along the river and is shifting to make these riverbanks more natural and enjoyable for people (in GREEN above). The provided program for the new design included a classroom, lecture hall, multi-use laboratories, restaurant/cafe, service spaces (offices, restrooms, et cetera)as well as necessary circulation. The total required square footage for the design was 10,000 sq. ft. Houtan Park, by Turenscape, was studied as a precedent for industrial-site remediation.

The idea behind the proposed building was to celebrate and utilize the Cuyahoga River-water, as well as storm runoff, to remediate the surrounding site while educating visitors about the quality of the areaâ&#x20AC;&#x2122;s water and how it can be improved. The roof form of the educational level was designed to control the collection of storm runoff into specific points so that it can be seen by the occupants inside. The sketch above was an early idea for the roof and wall collection system.

The sketches above are wall details of how the collected water on the roof would be exposed to the occupants inside the labs and classrooms, and then properly removed from the wall system and into the proposed onsite pond.

MAGLIANO IN TOSCANA The site for this project is a hill town on the west coast of Italy that was founded as a military fortress in the Medieval Age. It is a 10 minute drive to the Mediterranean Sea and is surrounded by rolling farm hills. The city entrances come from all sides and have direct routes through the city and to the churches (in PURPLE); one of the main draws of the city. The two entrances from the southern sides provide access for vehicles while the others are specific to pedestrians. Where the site is located, on the east side, will become one of the main entrances for visitors of the city once the planned parking lot is fully constructed.

CUT THROUGH FORM TO CREATE SECONDARY STREET OR ALLEYWAY.

The design was focused on creating a civic center for the residences and tourists of the hill town. With the new parking lot being added to accommodate for the tourism, the site would become the entrance-way for pedestrians into the city. The designed building includes 800 sq. m. of provided program, which consists of an exhibition space, library, cafe, laboratory, offices, and service spaces. The design was to incorporate proper circulation from the parking level to the town level above, which also included designing the layout and function of the lot itself. Professor Andrea Ponsi was adamant about handwork, which meant most analysis of site and process of design was done primarily through sketching and hand-modelling.

The project objective given to the class was to create a building that would serve the surrounding area of Cleveland, Ohio with a necessary center for health and wellness. The program provided to the class was a series of fitness programs, such as pools, racquetball courts, anaerobic and aerobic spaces, as well as relaxation programs, such as massage rooms, a meeting room, and exhibition space. These program pieces were not specifically defined by the instructor to allow us to interpret and investigate unique definitions of, and relationships between, each program. The total program area was approximately 20,000 sq. ft. The surrounding site, to the south, is a significant developing medical campus servicing the city. To the north is a dense urban neighborhood. The intention of the building is to accommodate the local people to the north while staying relative to the thriving medical region to the south. The format of this design project, and the entire class, was strictly hand-sketching, drawing, and modeling.

ANALYSIS - OPTIMAL EXPOSURE TO PROGRAMS WITHIN PROCESSIONAL PATH TO THE FITNESS FORM LONGEST POSSIBLE PATH, BUT LEAVES NO SPACE FOR THE PROCESSIONAL PROGRAMS

OPTIMAL - LONG PATH OF EXPOSURE WITH SPACE FOR PROCESSIONAL PROGRAM This booklet is a sample of academic design studies conducted from 2015 to 2018 at Kent State University: College Of Architecture and Enviro...

This booklet is a sample of academic design studies conducted from 2015 to 2018 at Kent State University: College Of Architecture and Enviro...