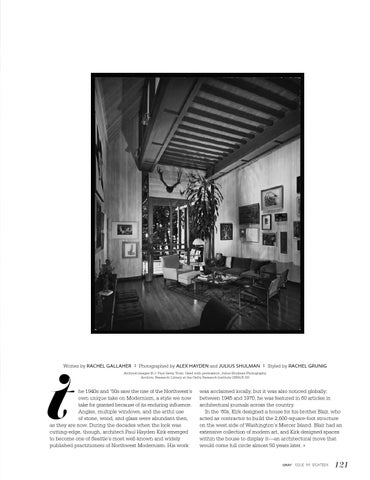 he 1940s and ‘50s saw the rise of the Northwest’s own unique take on Modernism, a style we now take for granted because of its enduring influence. Angles, multiple windows, and the artful use of stone, wood, and glass were abundant then, as they are now. During the decades when the look was cutting-edge, though, architect Paul Hayden Kirk emerged to become one of Seattle’s most well-known and widely published practitioners of Northwest Modernism. His work

was acclaimed locally, but it was also noticed globally; between 1945 and 1970, he was featured in 60 articles in architectural journals across the country. In the ‘60s, Kirk designed a house for his brother Blair, who acted as contractor to build the 2,600-square-foot structure on the west side of Washington’s Mercer Island. Blair had an extensive collection of modern art, and Kirk designed spaces within the house to display it—an architectural move that would come full circle almost 50 years later. » GRAY ISSUE No. EIGHTEEN

The Design Magazine for the Pacific Northwest GRAY spotlights the most innovative and inspiring design emerging from Washington, Oregon, Br...

The Design Magazine for the Pacific Northwest GRAY spotlights the most innovative and inspiring design emerging from Washington, Oregon, Br...