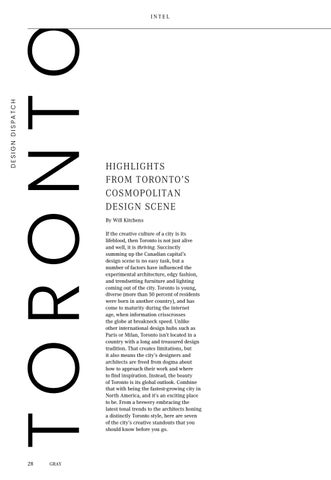 HIGHLIGHTS FROM TORONTO’S COSMOPOLITAN DESIGN SCENE By Will Kitchens If the creative culture of a city is its lifeblood, then Toronto is not just alive and well, it is thriving. Succinctly summing up the Canadian capital’s design scene is no easy task, but a number of factors have influenced the experimental architecture, edgy fashion, and trendsetting furniture and lighting coming out of the city. Toronto is young, diverse (more than 50 percent of residents were born in another country), and has come to maturity during the internet age, when information crisscrosses the globe at breakneck speed. Unlike other international design hubs such as Paris or Milan, Toronto isn’t located in a country with a long and treasured design tradition. That creates limitations, but it also means the city’s designers and architects are freed from dogma about how to approach their work and where to find inspiration. Instead, the beauty of Toronto is its global outlook. Combine that with being the fastest-growing city in North America, and it’s an exciting place to be. From a brewery embracing the latest tonal trends to the architects honing a distinctly Toronto style, here are seven of the city’s creative standouts that you should know before you go.

GRAY Magazine No. 57: The Vanguard Issue

GRAY Magazine No. 57: The Vanguard Issue