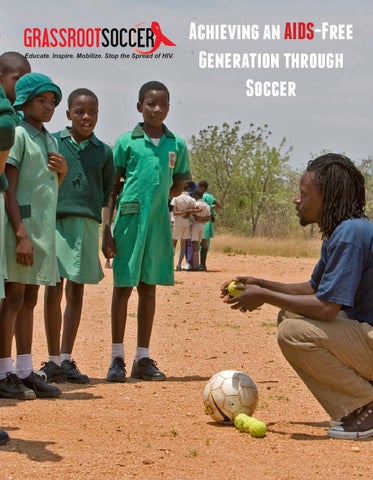 Achieving an AIDS-Free Generation through Soccer

• Young people ages 15-24 are among the hardest hit, accounting for roughly one in three new HIV infections. • Young women are particularly at risk, with rates of new infections up to four times higher than young men.

WHY IS HIV A PROBLEM AMONG YOUTH IN SUB-SAHARAN AFRICA? Poor Information: • Only 30% of youth demonstrate comprehensive HIV knowledge. Lack of Testing and Treatment: • Fewer than half of infected individuals know their status; these people cannot be treated and are 96% more likely to infect someone else than an HIV+ person on treatment. • Only 33% of young people stay on treatment. Harmful Gender Norms: • In many countries, more than a third of girls have experienced sexual violence by age 18. • Women who have experienced partner violence are 1.5 times more likely to contract HIV.

Stigma: • Stigma and discrimination contribute to a fear of testing and a lack of support for HIV+ individuals. Lack of Medical Male Circumcision: • Approximately 85% of men are not circumcised, a procedure which reduces a man’s risk of contracting HIV by 60%. Risky Behaviors: • A lack of knowledge, harmful gender norms, and stigma all contribute to risky behaviors such as older partners, overlapping partners, and drug and alcohol abuse, which fuel the epidemic.

OUR SOLUTION With 2.1 million new infections each year, HIV remains one of the world’s most serious challenges. But the tide is turning. In sub-Saharan Africa, HIV prevalance among young men and women (ages 15-24) fell by 42% from 2001 to 2012. For over a decade, Grassroot Soccer (GRS) has been an innovative player in HIV & AIDS prevention and is poised to play a leading role in ending the HIV epidemic and achieving an AIDS-free generation.

CURRICULUM The GRS SKILLZ curriculum is guided by the latest evidence of what works in prevention, testing and treatment.

WHY GRASSROOT SOCCER Soccer has the power to save lives. In the late 1990s, four players from one of Zimbabwe’s top professional soccer teams saw their teammates and friends die from AIDS. They decided they had to do something. For GRS CEO Tommy Clark, that meant training as a pediatric doctor, then specializing in HIV at one of the world’s top HIV research institutes, University of California, San Francisco. For Zimbabwean National Men’s Soccer Team Captain Methembe Ndlovu, it meant getting a degree from Dartmouth College and then returning to his home country to work in HIV prevention. In 2002, together with former teammates Kirk Friedrich and Ethan Zohn, they founded Grassroot Soccer.

“Grassroot Soccer takes a bold and fresh approach to HIV prevention that focuses on impact and results. They’ve got a great formula that embraces soccer and positive role models, and they are constantly testing new, innovative approaches that can build on their tremendous success so far.” - Joe Cerrell, Managing Director, Global Policy & Advocacy, Bill & Melinda Gates Foundation

GLOBAL REACH, LOCAL IMPACT Grassroot Soccer operates its own flagship sites in South Africa, Zambia, and Zimbabwe, and has worked with over 40 implementing partners to deliver GRS curricula in 20 additional countries, proving that our programs are both scalable and replicable.

PEACE CORPS PARTNERSHIP In addition to the partnerships highlighted on the map above, Grassroot Soccer works with over 1,100 Peace Corps volunteers in 46 countries in Africa, Asia, Europe, Latin America and the Caribbean to deliver HIV prevention education to youth in some of the most remote and under-resourced areas of the world.

Only one third of females and one fifth of males ages 15-19 have ever tested for HIV and received their results.

Major barriers to testing are fear of being seen at a clinic, lack of transport, stigma of testing positive, and concerns about confidentiality.

of people in sub-Saharan Africa who are eligible for treatment are not receiving it.

our gameplan Voluntary Counseling & Testing Tournaments Using the power of soccer, these events bring youth and community members together for a fun day of soccer matches combined with access to free HIV testing and counseling services.

GRS Caring Coaches Young adult role models educate and mentor adolescents, linking them to HIV testing and treatment services and supporting them every step of the way.

Support for HIV+ Youth In addition to referrals, GRS offers a safe and inclusive environment for HIV+ youth to openly discuss social concerns and support each other in adhering to HIV treatment.

“WE TESTED BECAUSE THE COACHES WERE SUPPORTIVE...AND WE FELT LIKE IT WAS THE RIGHT THING TO DO. IT’S RIGHT TO KNOW YOUR STATUS.” - GRS Participant

STRATEGY #2 the facts HIV / AIDS is the leading cause of death globally for women ages 15-49.

A young woman 15-24 yrs old in sub-Saharan Africa is as much as more likely than a young man to contract HIV.

Women who have experienced partner violence are more likely to acquire HIV.

In South Africa, more than one third of girls have experienced sexual violence by age 18.

Caring Coaches introduce girls to the sexual and reproductive health services available in their communities and accompany participants to access these services.

Empowering Girls Through Soccer In the communities where we work, soccer is still considered a boysâ&#x20AC;&#x2122; game. We give girls the chance to play in a fun environment, and we watch their confidence reach new heights.

GENDER our results WITHOUT GRASSROOT SOCCER

Self Esteem Through Sport

In 5 of the countries with the highest HIV burdens, only about of men are circumcised.

For every 4 circumcisions performed in Zimbabwe, 1 HIV infection can be averted.

570,000 HIV infections could be averted in Zimbabwe alone through increased scale-up and uptake of VMMC over 4 years.

Many myths persist about VMMC, so education is essential to ensure young men are making informed decisions. Caring Coaches teach young men about the procedure and its efficacy in reducing the transmission of HIV and sexually transmitted infections.

Circumcised male role models, including professional soccer players, share their own experiences, connect directly with participants, and encourage them to follow through with the procedure.

Soccer-Based Activities Soccer generates an environment that is conducive to open dialogue, and using soccer-based activities is a particularly effective means of engaging young men.

“VOLUNTARY MEDICAL MALE CIRCUMCISION IS A PROVEN BIOMEDICAL INTERVENTION THAT HAS THE POTENTIAL TO SAVE MILLIONS OF LIVES AND SIGNIFICANT RESOURCES.” - Amb. Eric Goosby, former US Global AIDS Coordinator

WHAT YOU CAN DO The impact of a $100,000 investment in Grassroot Soccer TESTING & TREATMENT Get 2,124 HIV+ youth in Zambia on treatment

$195 per HIV infection averted by using soccer to empower young men to get circumcised.*

$550 to hire, train and support a Grassroot Soccer Caring Coach for a year

$3,500 to support a young adult serving as an unpaid volunteer in Africa for a year

* Costs are for delivering an HIV prevention intervention.

“Doctors and scientists are trying their best. The power is in our hands. Now let’s go out there.” - Grassroot Soccer Participant Bulawayo, Zimbabwe